Meesa not understand purpose of dialect. 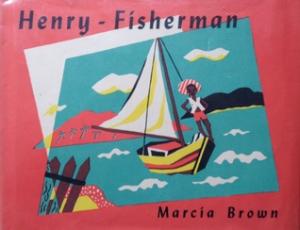 Pretty boring. Just a series of interludes in the life of Henry, a young boy who lives on the Caribbean island of St. Thomas. On his island, they speak English with a somewhat racist accent. It could be an accurate accent, though, so I can't completely assume that it's racist. (If it is accurate, does that mean it's not racist?) The accent is the only really cringey thing that stands out to me. "You is a good diver."

It says who he is. He says, "I want to be a fisherman like my father." And his father says, "No, you're too little." And then he walks to get water, and checks out the harbor and the stuff on the beach. And he washes clothes. And he goes shopping in the market. And he milks some goats. And then he gets a coconut. Jeez, enough!

Then his father says, "Okay, you're big enough. I need a helper." And then on his first outing, they encounter a shark, and he doesn't get hurt or anything, and they catch a bunch of fish, and then they go home. The end.

The illustrations are weirdly blocky. On most spreads, the left page is text and the right page is an illustration. The illustrations alternate between two colors (black and orange-- even when they're in the water, the water is orange) and five colors (brown, yellow, orange, blue, and black). No shading, just totally solid and blocky. It's very dated looking. The whole book is very dated. I wonder if, back in the day when this book was written, was "children's author" a respected profession?

The text is super boring. Despite the massive amount of text, there's no character development. The characters don't show emotion. There's nothing for the reader to identify with. "This happened." "Sometimes Henry does this." "On these other days, Henry does this." Just not interesting.