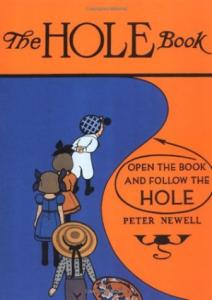 This book from 1908 (republished in 1985) is definitely a product of its time. It's got a novel idea in that there's a hole that is about the size of #2 pencil that runs all the way through the book except the last page. At the very beginning, a little boy is playing with a gun and it goes off and shoots a hole in the wall, and this bullet just keeps traveling forever in a ridiculous manner. I guess you could say that it kind of has an anti-gun message, or maybe a "don't play with guns" one, but not really. Nobody actually gets hurt. Some of the things the bullet does are good; some of them are bad. The whole thing is written in quatrains. Like I said, it's very dated, but it's kind of cute nonetheless.

I definitely wouldn't read it to a kid nowadays. There's a lot of violence, the kid wouldn't understand half the things that are going on, and it could really give a kid the idea that shooting a gun won't hurt anyone. Although there's a wildcat that was in somebody's gardens (it was probably a caged animal there) and it gets shot and presumably dies. People get mad at others because of things that they assume the other person is doing, but it's actually the bullet shooting things. A little boy is teasing a chained-up dog, and then the dog's chain gets shot apart and the dog gets free and is able to hurt the boy.

It's goofy. It's definitely more entertaining than most of its children's book contemporaries. It's not really relevant to today's kids. There's no overt bad message in it, and it's well-written, so it would end up in the middle if you didn't consider the cartoonish aspect of "nobody gets hurt by guns".

The characters are very reminiscent of other artwork from that time period. They have kind of unusual-looking eyes. When there's dialogue, it's often written in dialect, but I wouldn't say it's necessarily culturally insensitive. One person is smoking a pipe. There are Germans and a Russian, but they're drawn to look the same as others, just speaking with accents. However, I can only say this of the version I read. I checked the original book, which is online as it is in public domain, and it does have a rather racist spread in it with a black mother and her children whose watermelon has just been shot, the mother being referred to as "mammy." Ugh. No, no, no.

The more I think about this book and the more I learn about it, the worse it gets. On the other hand, I could see an updated version of this book becoming mildly popular. Maybe someone bounces a bouncy ball and it keeps going? It doesn't need to be a gun.

Don't worry about guns; they won't hurt you.