How Babies are Made

If it mentioned cesareans, it would be near perfect. 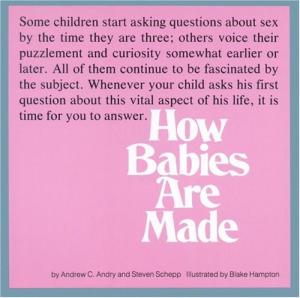 It's not exhaustive, but it's a very solid foundation. There's nothing vague, or metaphorical, in this book, as opposed to a great deal of other books about sex and reproduction. This book is quite detailed, but in an almost clinically detached way. It starts out talking about plants and the eggs and pollen of plants, and how a seed is made by bringing an egg and pollen together. Instead of pollen, animals have sperm. Eggs come from mothers, sperm comes from fathers. The pollen actually looks like a photograph of pollen, but for the most part the images are paper cutouts, which allows for bright colors and a sense of abstract detachedness when needed, and details when they're necessary. The book goes into chickens and where chicks come from, showing an illustration of chickens copulating, and the hen laying an egg. It mentions that most of the eggs we eat are unfertilized. Then it talks about puppies and dogs, showing the genitalia of the father dog, and two dogs copulating, with cross-sections where necessary: uterus, ovary, the direction that the egg takes, and later a puppy fetus inside the mother dog. Then the book shows a naked man and a woman standing next to each other (abstractly, without faces), and their version of copulation, which is their faces and shoulders as they lie under sheets, the man on top of the woman. There's a nice sentence: "Unlike plants and animals, when human mothers and fathers create a new baby they are sharing a very personal and special relationship." A good point. It shows a cross-section of the sperm going up in the vagina, then the egg going from the ovary to the uterus, and the fetus in the mother's uterus. It talks about the umbilical cord (unlike some other books), although it doesn't mention the placenta. Then "The muscles in your mother's body [help] you go out through her vagina. This is the same opening that your father's sperm went into when it fertilized the egg. The doctor also helped you out. You were born."

That's my only real problem with this book: it doesn't mention cesarean section. In 2017, that was 1 in 3 babies. That's a lot to ignore. When this book was revised in 1979, that percentage was much closer to 10%, but the increase from the time it was originally published should have tipped the authors off to an increasing trend.

After the birth, the umbilical cord is removed, but doesn't hurt, and then the baby drinks milk from a bottle or breast, and that's how families begin. It reinforces not only that two people were required to make the listening child, but that all other children were made in the same way. "All people begin their lives this same way." It ties the child and the concept of bearing children and sexuality in with the whole of humanity very nicely.

One interesting thing about this book is that it doesn't mention "man", "woman", "male", or "female", only using the terms "mother" and "father". Which is quite progressive for the time period. It's not a perfect book, but it's a great foundation. And the illustration style, where it can be very detailed in some parts of images, and quite abstract in others, works very well for the topic. It's a nice contrast to the weirdly cartoony images and metaphors of "Where Did I Come From?" There are no descriptions of how anything feels, just a factual recounting of events. There's no intent or desire implied anywhere, which is fine because those sorts of feelings differ in every unique situation. This book probably won't answer every single question, but it definitely does not shy away from the hard ones.

The basic details of human reproduction.