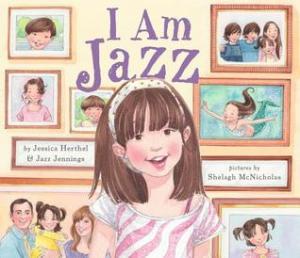 I know there are going to be people who are going to look at my review and go, "You're such an SJW, yadda yadda", as if accepting that transgender people are actually their mental gender instead of their physical gender is a political position instead of a moral responsibility, but I think this book really works. One of the main reasons is because it talks about a real person, and not a fictional person with potential issues.

It's a picture book biography of Jazz Jennings, discussing her life and what it was like for her growing up with "a girl brain but a boy body." "I was born this way!" She says. At first, her family thought she was a boy, but when she was a little kid the family went to a doctor who explained that Jazz is transgender. The parents were very understanding, and let her grow her hair long and wear girl clothes and things like that. It mentions how some of the teachers didn't understand at first, and sometimes kids still make fun of her, but she's a lot happier now with her life. She's not being forced to act like someone she's not.

I think as more people are publicly identifying as transgender, this book is a good way of explaining the issue to children. Children might have friends or relatives that are transgender. And there's no talk about the specifics of anatomy, for those people who think that the anatomical terms are inappropriate for children. It doesn't talk about sex. It's as inoffensive as possible while still being unapologetic. It uses very child-friendly language to deal with a topic that is complicated, in a very straightforward way. It doesn't have a fun story or anything, so kids might not request it to be read to them again and again (unless they are transgender and need reassurance that it's okay). It's a teaching tool, and it does an admirable job at it.

Reading it today, "Heather Has Two Mommies" is a pretty boring book. Obviously it was controversial and ground-breaking at the time, but "I Am Jazz" strikes the same matter-of-fact tone, while having the benefit of facts and true events behind it. It's very grounded. I'm sure someday we'll get to the point where books with transgender characters are numerous and nobody bats an eye. And I think this is the "Heather Has Two Mommies" for transgender people. This book needs to exist if only to fill a gap in teaching children about the reality of gender dysphoria.

Transgender people are different, but that's okay. Being different from others is good.