Life is easier when you make the most of what you've got. 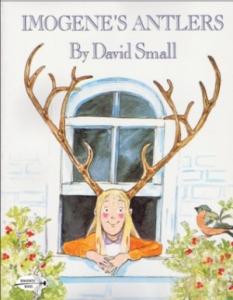 This girl named Imogene wakes up, finding that she has grown these massive antlers. Every time her mom sees her, she basically faints. They have the doctor come look at her, which, you know, is a reasonable thing. The first part of the story is basically the family trying to figure out why it happened. Her brother says, according to the encyclopedia, that she has turned into a rare form of miniature elk, which causes the mother to faint again.

Then people find utilitarian things to do with her antlers. It's kind of cool. Her mother declares that they have to get a hat to hide her antlers under. They get a milliner to come by who makes a hat immediately, just a giant bonnet that covers her antlers, and her mother hates it. Then Imogene goes to sleep, and the next day she wakes up without antlers, but she's got a peacock tail.

I think this book's message is, "Embrace differences." Basically, her mother is the only one that's got a problem with it (well, and the school principal, who is shown as glaring at her but having no advice to offer). It's like, so what if she's got antlers on her head? She just takes it like a champ, just keeps going and finds all kinds of cool things to do with her condition. She has her piano lessons where she's got her antlers bedecked in candles. It's great, and she looks pretty happy with her peacock tail at the end, too. It doesn't seem to be a metaphor for self-expression, but she is never shown as being upset that she has antlers. She either just takes it in stride or is completely thrilled about the whole situation, which is great. Only her mother is upset, everybody else is just kind of there watching this unfold. And the illustrations are great, too, with the other characters coming up with ideas like putting donuts all over her antlers and sending her out into the garden to feed the birds. There's a lovely picture of her covered in doughnuts and birds of all different kinds sitting on a bench outside. The book is basically saying, "Some people are different than other people and it's okay. You don't have to be upset that you don't fit in."

It's just wonderful to see somebody being happy with their differences rather than being upset like so many other books. So much of reality is people being told, "You can't do that" or "You can't be that way," and this girl is just like, "I am that way, so deal with it. This is who I am now, and I'm proud of it."

Differences are something that can be celebrated.