The Incredible Painting of Felix Clousseau

But who was art? 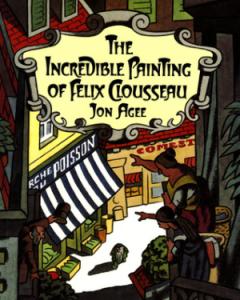 Surrealism in a book. I don't really know what to say about this one. It's about a man named Felix Clousseau who paints paintings that come to life. He paints a boa constrictor that attacks people, a volcano, and a cannon that shoots people. Because of the damage from his paintings, he gets sent to prison. Then a notorious jewel thief sneaks into the king's palace to steal the crown, and one of Felix's paintings is hanging there-- a painting of a dog-- and the dog catches the guy. So then Felix gets a medal and gets released from prison and goes home. In the last pages, it shows him entering a painting, revealing that he came from that painting before the book started. It's pretty trippy. There's enough weirdness going on here that children aren't gonna get the wrong message; they're not gonna think that paintings actually come to life.

I'm not really sure what to think about this book. It's well done. It's not confusing, but easily understandable. It's a fascinating story. It's not bad, and it's better than the average book by quite a bit. I guess this could be like a child's first introduction to a twist ending (if they haven't already read "The Monster at the End of this Book"). I definitely wasn't expecting that to be the ending of the book. I'm not sure if there's a real message to it, or if it's just surreal for surrealism's sake. People are just portrayed kind of like forces of nature, and Felix isn't really given any characterization except this weird power. It doesn't go into the source of the power, just the consequences. And there would be really weird consequences to that, wouldn't there?

Things can be good or bad depending on how you use them.