It's Not the Stork!

It's not the stork. Maybe it's a penguin? 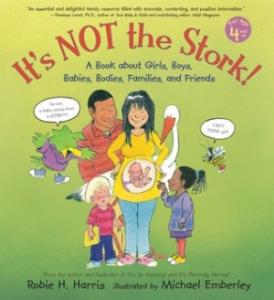 The only drawback I found in this book is its lack of mention of transgender or intersex people, but that may just be because it was published in 2006, and much has happened on that front in the last 12 years. This is otherwise a very thorough book. It's got cute little illustrations, but they're usually fairly realistic. At the beginning, it just says that girls and boys can do the same things, but girls and women have a vagina, and boys and men have a penis, and there's other things that are different. (Like it mentions that boys can stand up to pee in the toilet.)

It shows multicultural illustrations of a nude girl and a boy, probably about six or seven years old, from the rear, and again from the front, labeling all of the parts on the outside (and good job for labeling it "vulva" and not "vagina"). It also shows a basic diagram of parts inside the body as well, like the vas deferens tubes, testicles, scrotum, ovaries, and Fallopian tubes. It talks about how both boys and girls have bladders and urethras. It mentions a little bit about why boys and girls cannot have babies until their bodies are mature. It actually mentions the word sex: "Children are much too young to do this special kind of loving--called 'sex'--that grown-ups do." And it actually mentions in vitro fertilization (although it doesn't actually call it that): "A doctor can take an egg and a sperm and put them into a little dish where the sperm can swim into the egg." Or "put sperm into the woman's vagina." And it shows some diagrams and cutesy illustrations of a bunch of sperm going to an egg. It talks about the baby growing in the womb, often with actual size diagrams, which is pretty cool. It explains how a fetus eats and breathes, and talks about what a fetus might be doing inside the uterus, including mentioning that there might be more than one baby in the womb. Then it talks about different kinds of ways that babies can be born, vaginally or through a Cesarean (points for actually using the word).

Like many other books, it bafflingly avoids using the words "umbilical cord." It also doesn't seem to use the word "placenta," although it mentions it functionally.

Then it goes into good and bad touching, and what to do "if any person touches 'your privates' or any other part of your body that you do not want them to." Which I think is awesome. It's not just the privates that you're concerned about--if somebody touches your head and you don't want them to, you have a right to not be touched there. That's something that I'm big about in my family. You don't have to hug. You don't have to kiss if you don't want to. It's your body; you're in charge, unless there's a very good reason (health, safety, etc.). It talks a little bit about being good friends, and about how friends should be accepting if they want you to do something and you say no. It continues on the same theme, but adds things like don't tease someone or do something dangerous.

It could be slightly more accurate by using the words "placenta" and "umbilical cord," (although they might be hidden in the massive amount of text in this book--despite saying "for ages four and up"), but this is a lot more thorough than books like "Where Did I Come From?" It'd be great if it dealt with transgender issues, but that's a tough thing to find in a picture book and we've come through a lot as far as transgender issues go since 2006. Plus they're trying to tackle the most common circumstances. But good for them on expanding that to a lot of less common circumstances like families with two mothers or adoption. And it's great for them to include Cesarean sections. And it also mentions, along with the bad touching, that you can touch yourself and that's perfectly okay. This book is definitely in the running for what I'm going to use to teach my kids about sex.

Where babies come from. Also, don't let anybody touch you in a way you don't want them to.