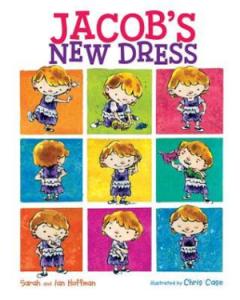 It took long enough, but I finally found a good book that talks about this subject. It's really difficult to find. There are other more well-known books out there, like "Sparkle Boy" and "Princess Boy". They're not bad, but to me, "Jacob's New Dress" is what those books were trying to be, and not quite reaching.

There's a little boy named Jacob. He's in preschool, or kindergarten, somewhere around that age. At school, he goes to the dress-up corner with his friend Emily. They both dress up in dresses. Jacob gets the princess crown first and says he's going to be the princess. Another little boy named Christopher says, "Jacob, why do you always wear the girl clothes? Put on the knight armor. That's what the boy wears!" Emily responds, "Christopher, stop telling us what to do!" The teacher comes over, and Christopher complains about Jacob wearing "girl clothes," and the teacher says, "The dress-up corner is where we come to use our imaginations." Basically, you can be anything you want to be. Jacob comes home from school. His mom asks how school was, and Jacob is upset because Christopher was making fun of him wearing a dress. Jacob's mom suggests to him that he can get "the dress [he] wore on Halloween and play in that." So he does. He wants to wear it to school, but she says no, that's for dress-up at home. Since it's made of lace, it could get dirty at school. So he asks, 'Okay, well, can I get a regular dress I can wear to school?' She thinks about this, while he wanders around and pretends to be a bird and curls up in a nest and thinks about his school dress.

The next morning, he comes up with an idea. He takes a giant bath towel and wraps it around himself and ties it at the waist with some ribbon. His mother asks him what it is, and he says, "It's like a dress, but I can get it dirty... I made it!" His dad says, "You can't go to school like that." His mom tells him to put a shirt and some shorts on underneath it, and then they can go to school. At school, Christopher demands to know what it is. Jacob's mom says it's something new he invented. Emily says she wants one like it, and Jacob explains that it's not a dress, it's a "dress-thing", and smiles and tells Emily he can make her one. When they're all playing tag on the playground, Christopher runs up and yanks off the towel.

Jacob is sad after school, and his mother says, "I'm sorry. Christopher's not always a good friend." Jacob asks his mom, "Can you help me make a real dress?" The book says, "Mom didn't answer. The longer she didn't answer, the less Jacob could breathe." Finally, she says, "Let's get the sewing machine.... There are all sorts of ways to be a boy, right?" They make a dress. Jacob shows it to his father, who "studie[s] the dress," and "Jacob start[s] to get that can't-breathe feeling again," but his dad says, "I can see you worked hard on that dress. Are you sure you want to wear it to school?" Jacob says yes. His father smiles and says, "Well, it's not what I would wear, but you look great."

The next day, he and Emily are happy that they're both wearing purple and white dresses. At circle time, Jacob shows off his dress and says he and his mother made it together. The teacher asks if it was hard to do, but Christopher interrupts, wanting to know why Jacob wears dresses. The teacher says, "I think Jacob wears what he's comfortable in. Just like you do. Not very long ago little girls couldn't wear pants. Can you imagine that?" Christopher's ignores it, saying that his dad says that boys can't wear dresses. Jacob's a little bit nervous. Later, they're on the playground, about to play tag. Christopher says it's going to be boys versus girls, and "Jacob, you're on the girls' team!" Everybody laughs at him. But then it says, "Jacob felt his dress surrounding him. Like armor. Soft, cottony, magic armor." And on the last spread, he says, "Christopher, I made this dress, I'm proud of it, and I'm going to wear it! And you know what else? You're it!" And then he runs off, "His dress spreading out like wings."

That is such an awesome, empowering ending! It's so realistic, because if you have somebody bothering you about that kind of thing, they're not going to magically transform their minds. Maybe in the future, Christopher will come to terms with it. Maybe he won't. But the important thing is that Jacob understands that it's not Christopher's choice what he wears. It's up to Jacob. It's his body, and his clothes. He's proud of the dress that he and his mother made together. I love the fact that although the mother and the father support Jacob 100%, and never say anything against his choices, it shows that it takes them time to change to a new way of thinking. The only exception is reasonable, when Jacob's father says he can't go to school wearing just a bath towel. It's clear that it's non-trivial for the mother and father to make these decisions, and to a more nuanced reader, that they are weighing the possible consequences. They already know that Christopher is probably going to make fun of Jacob. And they know that Jacob might be hurt by that. But they decide that it's only with their complete support that Jacob will be able to walk his own path in life.

I don't think there's anything in this book that I dislike.

Anybody can wear any clothes that they want. Things are not reserved for people by gender.