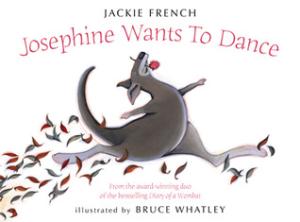 It's a very Australian book, and does not shy away from that. The main character is a kangaroo who wants to learn how to dance. Her brother keeps repeatedly telling her that she should stop trying to learn how to dance, because kangaroos don't dance. She sees that there's a ballet performance coming soon in town, so she sneaks into the (human) town and watches them practice night after night. She already knew how to dance somewhat by watching other animals and how they move. But now she was studying ballet. On the day of the first performance, the the lead and her understudy are both indisposed, and the director freaks out. Then Josephine comes in and dances. Everybody thinks it's ridiculous until they watch her and see that she knows the part and so the director takes her to the costume designer, who does his best to make her an outfit. When everybody comes on stage for the performance, it says, "Someone in the audience giggled. 'It's a kangaroo!'" But then they watch her dance and they're silent and then they clap and cheer. She's an awesome dancer. Then all the audience members dance and one of them is dancing with a sheep, and there's a wombat in a tutu... and that's the end.

I just like that it's got a great message. The illustrations are fun-- kind of a watercolor, possibly pastel aspect to them-- they're like paintings, with crisp edges. Her brother just constantly discourages her from doing what she enjoys, but she puts in the effort, and she's successful. Good for her! It's kind of like the kangaroo version of the book "Amazing Grace." She doesn't just magically learn how to dance because she wants to; she learns how to dance because she puts in the effort and practices. It takes a little bit of time for people to get used to it, but that's how the world works. Sometimes people do things you don't expect them to do. Sometimes people don't fit into your neat little molds, and that's okay. The world is better for it. The world is enriched by people who don't fit into molds, and that's something I've always appreciated, so that's why I like this book.

If you know you can do something, don't listen to people telling you that you can't.