King Bidgood's in the Bathtub

Who's in the what now? 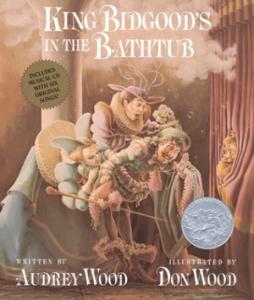 This book is just gorgeous. Practically any page in this book could be framed and hung on the wall. Some of them just have the most amazing details and you could examine them for a half hour and probably not find everything in the pictures. It has that kind of 1970s-1980s charm, where the there's a lot of colors but they're kind of muted, and the artist does a great job with the light at the different times of day.

The story is, there's a king: King Bidgood. When the sun comes up in the morning, his page calls for help because King Bidgood's in the bathtub and he won't get out. The knight says, "Oh, he'll get out, because it's time to battle," but the king says, "No, we're gonna battle in the tub!" And then the next spread is the knight and the king fighting with toy soldiers and ships in the bathtub. It continues in that vein all day long. He eats lunch in the tub, and even fishes in the tub.

Fishing in the tub seems like it would be like super dangerous but they don't seem to hurt each other with the hooks. Actually, they catch quite a lot of fish. I'm not sure if they put the fish in the tub first (it never shows them putting the fish in the tub, but the page definitely has to keep bringing water and taking all this random stuff out of the tub from the various activities).

At night, the whole court says, "It's time for the masquerade ball," and the king says, "We're gonna dance in the tub." At the end, the court says, "Help, get us out of the tub," basically, and then the young page goes, "Oh, okay," and then pulls the plug. I don't know why he didn't do that to begin with, but maybe he just needed more confidence or some backup. The last page is the king running away from the tub, holding a towel around himself.

The expressions of shock on the faces of all the members of the court are hilarious. It's clear that the king is supposed to be naked but nothing is ever shown (this isn't "In the Night Kitchen" level). There's bubbles in the bathtub-- you can get away with that since he's male-- and the other people who get in the bathtub with him are at least partially dressed.

The book seems like it would function as wish fulfillment for a child listener. When mommy says, "It's time to get out of the tub, we have to go eat," maybe the kid wonders, "Why can't we eat in the tub? If I was the boss, we would eat in the tub. You'd listen to me if I was the king."

The artwork is actually oil paintings. The colors are very pretty. It's very well done. If you flip through the book just right, you can also see some interesting repetition in the art, as well, such as the characters often being in the same positions on every other page. It's interesting to watch the put-upon young page just getting more and more frustrated with the king not doing what he's supposed to be doing and hanging out in the tub instead. The king spends an entire day in the tub-- you would think at a certain point that he would just be like waterlogged and his fingers would be prunes.

But it's more imaginative than anything else. It's a fantasy tub. The king's hair is all curly, so you can tell it's never wet. And the amount of food that is served for lunch is just ridiculous. And gorgeous.

Baths can be fun. Or, it would be awesome if you could do whatever you wanted to do, but eventually you probably should face up to reality.