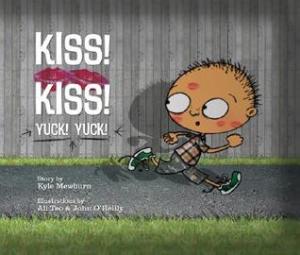 This is a bad book. There's a little boy named Andy. Whenever his aunt Elsie visits, she always kisses him sloppily, and he does not like it. So he repeatedly hides from her, and she tricks him into coming out and grabs him against his will and kisses him on the face. No matter where he goes, or where he hides, she keeps coming after him and kissing him. One day when he hides, she just doesn't show up. He comes out and asks his dad what happened, and his dad says that she broke her leg. So she doesn't come for a couple of weeks, and then she comes in a taxi, on crutches, with her leg in a cast. Andy runs out and grabs her and gives her sloppy kisses.

Somebody can love someone and miss their company, and still not want them to cross certain boundaries. If he doesn't like her kissing him on the face (and she clearly knows this, given his hiding from her and her tricking him into coming out) then she needs to respect his bodily autonomy. This is not okay.

This book is basically the polar opposite of "Miles is the Boss of his Body," and it doesn't give children any recourse if they don't like being kissed. It just basically says, 'He'll grow into it,' which is not an okay thing to tell kids. It's perfectly reasonable for him to enjoy his Aunt Elsie's company and for him to miss her when she's not there and she's broken her leg, and still not want her to kiss him. It's okay. That's a choice that he can make for himself, and she needs to respect that if she really loves him. Love is about letting go of your desires and allowing others to make their own choices.

It's just not okay for a book to basically trample over a kid's wishes, especially when it's really a simple thing that he's asking for. She needs to find something else that she can do for him, or with him, that is the equivalent to her of kissing that he at least tolerates, if not enjoys. Does he like gentle kisses? Hugs? High-fives?