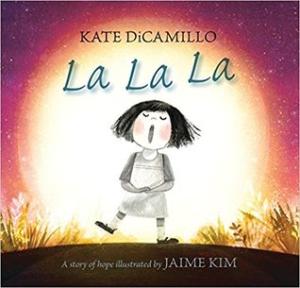 It's a pretty basic story, with very few words. The only words are "La" and variations thereof. A little girl sings "La," hoping that someone will hear her and respond, but nobody does. She seems very lonely. Then she climbs a ladder and sings at the moon and there's no response. She dejectedly goes to sleep, but is woken by the moon singing, "La" back at her. At the end, they sing together. It's cute, albeit somewhat strange.

It's pretty. I can see why people like it. It's simple and there's a sparse quality to it, despite the richness of illustrations. Not very much is happening, but it uses its several pages to give a lot of detail about how the main character is feeling. The emotions and the body language that she has are very critical to telling the story. Without that, it would be hard to tell that she was frustrated or lonely, but it's pretty clear even without reading the afterword that the book is about loneliness, and finding that you're not alone.

It's really well done. I wouldn't call it great prose because there's no writing per se, but the pacing of the writing is great. The story is told through the illustrations.

Don't give up, you're not alone.