Let's try to understand each other a little bit more. 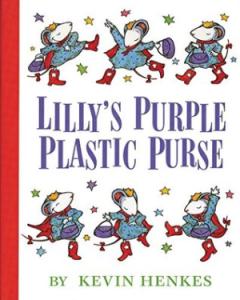 I like the way that Lilly has a problem, makes a mistake, and she totally owns up to it. And the primary grown-up in this story is just really responsible and does exactly the right thing.

Lilly is a little girl in school. I'm not sure what grade she's in (it looks like maybe second or third?). She really loves her teacher. He's basically "the cool teacher." One weekend, she goes shopping with her grandmother and gets some awesome stuff, including sunglasses, three shiny quarters, and a purple plastic purse "that played a jaunty tune when it was opened." She takes it to school, and wants to show everybody. She just can't stop herself, because she's so excited. Her teacher keeps saying, "Wait until recess or Sharing Time." But when the teacher is talking, she can't resist whispering very loudly how awesome her stuff is. So her teacher takes her stuff away and she feels terrible about it. "Lily's stomach lurched. She felt like crying. Her glasses were gone. Her quarters were gone. Her purple plastic purse was gone. Lilly longed for her purse all morning. She was even too sad to eat the snack Mr. Slinger served before recess."

When she goes to the drawing corner, she's so mad that she draws a mean picture of her teacher and then sneaks it into his book bag. At the end of the day, he gives back her her stuff and says, 'Your stuff is great. It's pretty. You can bring it back to school as long as you don't disturb the rest of the class.' And as she's going home, she opens her purse, and inside are some snacks and a note from him, saying, "Today was a difficult day. Tomorrow will be better." Then she feels terrible about giving him the mean drawing. She runs home and tells her parents everything, and feels so bad that she "decide[s] to sit in the uncooperative chair." And instead of watching cartoons, she decides to draw a new picture of him and write a story with it. In both of them, she talks about how sorry she is and talks about the teacher forgiving her.

Her mother helps by writing a note, and her father makes some snacks for her to bring to school. She goes to school early and gives the snacks, the note, and the story to her teacher and apologizes profusely. He's very appreciative of her apology, and shows her the original mean picture, saying, "What do you think we should do with this?" She says, "Could we just throw it away?" He says, "Excellent idea!"

During Sharing Time, she shows off her purse, her quarters, and her sunglasses, and everybody likes them. For the rest of the day, she keeps them inside her desk, looking at them every once in a while, but she doesn't say anything or make any noise about them. Everybody's happy again, and she wants to be a teacher again (which she had said at the beginning, but changed her mind when she was mad). "Mr. Slinger was right--it had been a better day."

I think it's a great book, because it shows something that kids, like my four-year-old, would totally do. When he had a new pair of shoes, he walked into preschool telling everybody about them, even though we got there late and the teacher was talking to the other kids. He can't hold his enthusiasm inside, and that's an extremely common thing for kids. They have to learn respect for other people and their time, especially when others are trying to learn in a group context. The teacher in the story just did exactly the right thing. He understands that it's difficult to learn the right place and time to show their enthusiasm and be the center of attention. And when Lilly realizes that he's not being mean, she sees that what she did was wrong and takes steps to correct it. She tells her parents about it, but even before her parents write the note or make the snacks, she's already making a new picture and talking about how sorry she is. She puts herself in the uncooperative chair. She's trying to figure out the right steps to rectify the problem, to fix her mistake.

And the teacher is, of course, completely understanding. She made a mistake. He's not going to hate her forever because she drew a mean picture of him. She was having a bad day, and there's no way she could have known what he was thinking until she read the note. He's clearly knowledgeable enough to understand that this was a miscommunication, and his note is totally right. It shows her learning from her mistake, and everybody else being supportive of that. It's got a really great outcome.

Making a mistake is not permanent. You can fix things that you did wrong. Or, when you're at school, you need to let the teacher talk without distracting the other children.