If she gets the rest of the outfit, she could be a superhero. 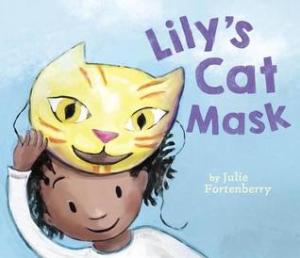 It's not as good as I'd like it to be; it doesn't seem to resolve anything and it kind of ends abruptly, but what is there is good. A little girl named Lily is shopping for new things with her dad because she's starting school, and she sees a cat mask and her dad buys it for her. She's really shy, so she wears the cat mask a lot: around around the house, outside, to the doctor, at parties, and things like that. She's basically hiding behind the cat mask because of her shyness. Probably the best scene in the book is when she loses the cat mask and her dad actually makes her a bunny rabbit hoodie which is awesome of him. She finds the mask again, and then she starts school. The teacher won't allow her to wear it at school, except at recess. Sometimes she sneaks it on in class anyway and then the teacher like takes it away and puts in a desk drawer. One day, the teacher says they're going to have a costume party at the end of the week, to which she obviously wears her cat mask, and there's a boy in her class who also wears a cat mask and they play on the swings with each other. The end.

It's kind of a cute ending, but it doesn't really feel like her crippling shyness is resolved, and she's not given any society-approved coping mechanisms. The teacher neither accepts her wearing the cat mask, nor does she find some kind of substitute for hit that the teacher approves of, which is kind of unusual in children's books like this. Usually there's something that the the kid comes up with that will work just as well. It comes across less as a story that teaches a message and more as a story about something that happened to a real child (though it doesn't imply that it's based on a true story anywhere in the extra information or anything). It just feels like an incomplete story.

Like I said, what's there is good. I really enjoy the interaction between Lily and her father and the way that she uses the mask to hide in circumstances that would be definitely uncomfortable for people who have moderate social anxiety (or shyness, as the book calls it). A lot of other reviewers seem to really like this book. I think maybe they're seeing something I'm not, because I wouldn't say it was groundbreaking or amazing, but it's a good book.

Sometimes people are shy? You can't wear masks in school?