Children are not tasty or nutritious. 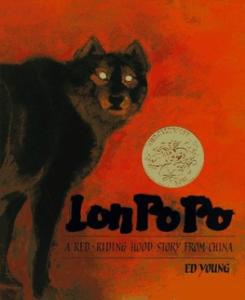 This is described as the Chinese version of Little Red Riding Hood. I have to say that it's better than Little Red Riding Hood in many ways. There's a woman in the country who has three daughters, Shang, Tao, and Paotze. They don't seem to have a father. It's their grandmother's birthday, and the mother goes off to visit her, leaving the three children at home. She basically says, "Hey, I'm not coming back tonight, so lock and latch the door at sunset. There are dangers out there." There's a wolf that lives nearby, and he sees the mother leave, and at dusk he comes by and knocks on the door and claims to be the grandmother. The eldest is quite suspicious, but the two younger kids open the door and let the wolf in (who blows out the candle as soon as he enters, solidifying his poor disguise) and the two little kids run up and hug him. He says, "You know what, it's time for bed. I'm sleepy." And they all crawl into bed, and the eldest girl feels his tail and his claws, and thinks, "This is unusual," and lights a candle and catches a glimpse of the wolf's face before he blows it out. She says, "Hey, I bet you're hungry. We have ginkgo nuts outside in our tree, way at the top. They are delicious. And they'll make you live forever." The wolf is like, "Oh, it's so so high, I can't climb up the tree." The girl says, "Well, we'll get some for you." So all three of the girls go out, in the middle of night, and the eldest tells them that what they think is their grandmother is actually a wolf. The wolf is like, "Um, you guys coming down? What's up?" and they're like, "Okay, well, these nuts are magic, but you need to pluck them from the tree yourself in order to get the magic." And they keep describing how delicious they are, and the wolf is like, "Oh, fine." The eldest daughter says, "You know what? There's a basket with a rope. Since you can't climb, I'll pull you up." And then about halfway up she lets go of the rope and the wolf falls down. They repeat that two more times, with the other daughters helping and the wolf getting higher each time, and eventually they drop the wolf from the top of the tree and the wolf dies. So they go back to bed. The next day, their mother comes back and they tell her the story.

What I like about this story, as opposed to the western version of Little Red Riding Hood, is that in this book they save themselves. Although in a very old version called "The Story of Grandmother" Little Red Riding Hood realizes that it's not her grandmother and tells the wolf she has to pee so she needs to go outside, then escapes. But nowadays there's almost always a woodcutter (a grownup, a man) involved. But in Lon Po Po, from the very beginning, the eldest child is suspicious and realizes that the situation doesn't make sense. And she's the one that comes up with a way to extricate them from the problem. It can be seen as a message of female empowerment, but beyond that it's a message of determination. Don't give up. Be persistent. Be aware of what's going on around you. Cleverness is what wins the day in this. And the wolf isn't a gullible idiot, they just play on his arrogance that he has them thoroughly tricked, and his greed and desire for the magic ginkgo nuts. He's the one trying to trick and kill them, but he ends up getting tricked and killed in the end. Karmic retribution.

Intelligence and persistence can triumph over evil.