Could give Jack Black a run for his money. 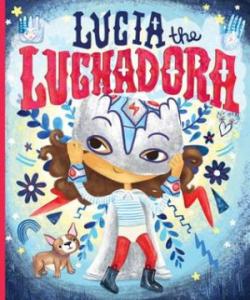 The main character is a little girl named Lucía, who is wearing a cape in the playground and pretending to be a superhero. Two boys playing in the same playground are also pretending to be superheroes, and she tries to play with them but they don't let her, saying, "Girls can't be superheroes. Girls are just made of sugar and spice and everything nice." Understandably, she gets mad. Her grandmother, who was watching this, tells Lucía that as a young woman she was a luchadora -- a Latin American masked wrestler. She gives the granddaughter her silver mask and silver cape. The next day at the playground, the two boys are playing around and she comes with her silver mask and silver cape and the boys try to fight her for some reason, attempting to crash into her, but she is fast and acrobatic. She leaps off the monkey bars and sticks the landing.

Before long, other people start wearing Lucha Libre masks on the playground. Then she sees another girl on the playground wearing a pink mask with red glittery hearts and she says she wants to run over and say hi to the girl, but those same boys from before tell the new girl that girls can't be superheroes. So Lucía climbs up to the top of a scary tall slide that all the kids are scared of going down, and she slides down and all the other kids are amazed and cheer. The girl in the pink mask still looks really sad. Then Lucía seems to realize (it's not explicitly stated) that with her mask on, nobody can tell she's a girl, so she breaks the luchador's code and takes off her mask to reveal her secret identity. Then other kids start clapping, and other luchadores pull off their masks, revealing that some of the other kids were also hiding the fact that they were girls. And then the kids all play together.

I really like the message of equality and female empowerment, and how it doesn't say that girls are better than boys, just not to discriminate against people because they're girls. As females, if it takes us hiding who we are for people to notice us, then maybe we need to do that temporarily, but it's important to also show who you truly are to help others. I really enjoyed the book.

Girls can be whatever they want to be.