The Many Lives of Benjamin Franklin 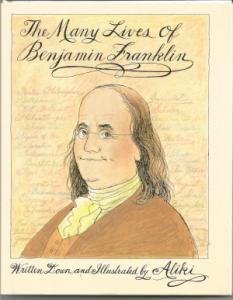 This may be a little busy for younger kids, but it's good. It's a fairly basic biography of Benjamin Franklin. Aliki's style is really interesting. There's the regular text, of course, but the illustrations are almost like a comic book, where they are captioned and often have word balloons. There's a lot of interesting stuff here. There's a lot of text, but it's not necessarily the main text; it's kind of auxiliary text.

The story goes through Benjamin Franklin's life. He learns to be a printer with his older brother, leaves Boston, goes to Philadelphia, becomes a becoming a printer there, and then starts his own printing shop. He publishes a newspaper and writes Poor Richard's Almanack. He gets married. At age 42, he retires to become an inventor and scientist and does a whole bunch of other stuff. Then he works for American independence, the war is fought, and then he helps write the Constitution.

He's a very fascinating character. There's definitely a lot of information-- not necessarily much of a story, but kind of an information dump. But if you're trying to get this information across, I can't think of a more interesting way to do it then with the text accompanied by the pictures like this. I really like the style. It works really well.

Benjamin Franklin was a cool dude.