When King Daddy promises the moon, he delivers. 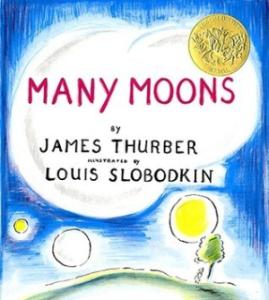 A young princess gets sick because she eats too many raspberry tarts. She is so sick that she calls for her father the king, and he is so worried that he offers to get her anything she wants. She says she wants the moon. He thinks it's a reasonable request, since he has so many people working for him and believes they can figure it out, so he agrees. He then asks a bunch of people and they all tell him it's very far away and gigantic. Everybody he asks says it's further away, even bigger, and made out of some bizarre material. He gets angrier every time they tell him that. Finally he is sitting alone, upset, and the court jester comes up and the king explains the problem to him. The jester says, "Well, you asked super smart people, so they must be right, but why don't you ask your daughter? How far away does she think it is? How big does she think it is? What does she think it's made out of?"

It turns out she thinks it's as big as her thumbnail, and gets tangled in the branches of the tree outside, and it's made out of gold, so the jester just goes to a blacksmith and has him make a moon out of gold and puts it on a necklace for her, and she's super happy. And then there's another subplot about how the king freaks out because the moon is going to be back in the sky the next night, and how is the princess going to deal with the one on her necklace being different, but it turns out she's okay with that, because when she loses a tooth, she grows another one, so she figures it's just the way of the world.

It's kind of bad in that it turns out that none of them are really correct about the moon. It is super big and super far away, and they couldn't have really gotten it for him, but I think the real message is that everybody's opinion is equally important, even children.

Try to understand things from others' point of view.