Mesmerized: How Ben Franklin Solved a Mystery that Baffled All of France

This is so awesome. A great book. 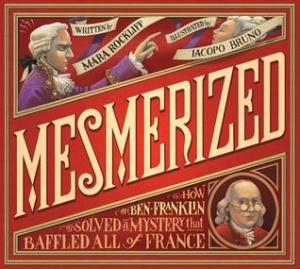 Yes, yes, yes, yes, yes. A thousand times yes! This is how books should be done! This is a great, great book. It takes a historical event and teaches you something about the world around you.

It tells the story of Benjamin Franklin going to Paris during the American Revolution. He's trying to get the help of the French to fight the war. The Enlightenment is happening and the French are getting all fired up about science. It places Benjamin Franklin and the American Revolution into historical context. As Franklin is arriving, people are discussing new discoveries like the first hot-air balloons, and Antoine Lavoisier showing people about hydrogen and oxygen, and the French love how Franklin is scientific-minded and how he did the experiment with the kite supporting the idea that lightning is electricity.

There's a famous personality in France at the time named Dr. Mesmer. The book makes a huge contrast between Mesmer's fancy style and Franklin's plain, down-to-earth style. (It mentions in the afterword that Franklin was already an old man at the time, with gout and kidney stones, and wore his simple hat to cover where he was balding.) Mesmer is putting on shows where he hypnotizes people (although they didn't call it that at the time, since he popularized the concept in the West). He actually started out using magnets to heal people, but then realized that he could get the same results without magnets. So he theorized that there was another force at work that he called "animal magnetism", meaning that it was magnetism that didn't work on metal, but only on animals and people. He was a celebrity in France and the public was amazed by it, but doctors were angry because they were losing patients to him. (The afterward mentions that "doctors at the time favored treatment such as bleeding and purging, [so] Mesmer's patients may have gotten better simply because he didn't make them worse.") The doctors went to the King, who appointed a team of people to investigate Mesmer, including Benjamin Franklin (as well as the aforementioned Lavoisier).

The book basically distills their work down to just Franklin (kind of like movies do when they combine several people into one character), who can't go see Dr. Mesmer because he's old and carriages cause him pain, and Mesmer refuses to come to him, but Mesmer's assistant Charles D'Eslon offers to come to the investigators. Charles performs a demonstration, and the book talks about the observation step of the scientific method. Franklin observes that when Charles waves his wand toward Franklin, Franklin doesn't feel anything (unlike the other "patients"). "Ben observe[s] the difference between the patient's reactions and his own." Mesmer claims that Franklin is somehow special and therefore has a different experience. Franklin, however, wonders if mesmerism is actually mental on the part of the recipient. (It's unclear how historically accurate this hypothesis and its timing are, but the point is made.) "Ben hypothesize[s] that what the patients felt was caused by their own minds, not by an invisible force." So he watches Charles working on someone else, and she says when "Charles wave[s] his fingers.... wherever his hand move[s], she [feels] the same fiery heat." Then she's blindfolded, and "when Charles wave[s] his fingers near her stomach, the patient.... [says] she [feels] the heat-- in her ear!" Ben has another patient blindfolded, and tells him he's being mesmerized when he's actually not, and he says he feels it. Then Charles comes into the room without the patient knowing, and tries to affect him, but the patient doesn't feel anything. Charles is baffled by this, because he thought it was a real phenomenon. He's (portrayed as, at least) very accepting of the results. "Ben test[s] his hypothesis by blindfolding the patients.... if the patient expect[s] and believe[s] something [will] happen, something [does]-- even without the force!" "If the patient [does] not expect anything to happen, nothing [does]-- even with the force!"

"The test results supported Ben's hypothesis that the so-called force did not exist." Of course, usually it's better to use a null hypothesis and try to disprove something, since it's a lot easier than proving something, but it's harder to explain. So Ben (and, presumably, the whole team that was working with him) goes back to the King and tells him their results. Mesmer leaves town in disgrace, and Ben goes back to the United States and helps win the Revolutionary War.

The book could have just ended there, but it cements the idea in the reader's head by drawing a parallel between mesmerism and the placebo effect, mentioning that when a new medication is developed, it's tested with a control group. "But what about people who feel better by taking a placebo? Think of Dr. Mesmer's patients.... their feelings were real, even if the force supposed to be at work wasn't. And while not all of them recovered from their illness, many did." And it talks about hypnosis how Mesmer was really using hypnosis and that "scientists are still learning about hypnosis, the placebo effect, and many other ways our minds can help us heal." How hypnosis works and what it can do is still somewhat of a mystery, but we know the mind has a lot of effect on pain. Hypnosis is related to meditation, which can reduce stress and anxiety. I know a woman who needed a blood transfusion, and she was hypnotized at the hospital to make the procedure much less painful. There are definitely uses for the technique as long as we understand its limitations.

In the afterword, it spells out the scientific method again, including steps, although it's a little bit misleading when it says, "If the results support your hypothesis, you're done." Evidence is good, but it's not proof. But, as I said earlier, the null hypothesis is a little more complicated to explain, so I give the book some leeway here. And it's absolutely not trivial to design an experiment that will actually test the hypothesis you're proposing. I had a professor tell us that she found that graduate students often didn't understand experimental design. I can't very well knock a children's book for failing to get such a complex aspect of the topic across.

Like I said, this is an amazing book. I really love it. I've always loved the character of Ben Franklin, and the different things that he did, still going strong even in his 80s. I really love his style and his dedication to science. I'm sure he had his flaws, and he did own slaves at one point, but he changed his mind later in life and became an abolitionist. He was a great scientist, and this book uses that and an actual event from history that is well-documented to help teach about science and how it is helpful. It's pretty likely that Mesmer actually believed in the force he claimed to have discovered, but you have to remember that the easiest person to fool is yourself. And that's what the scientific method is for, decreasing the ways in which we can fool ourselves. And not just talking about Franklin and his actions, but including that spread about placebos and testing medication! Bravo!

This book talks about science and it does in a very science positive-way. It talks about the importance of knowing the truth and knowing reality. It's got great pictures and great writing as well. As usual with my reviews, I checked the book out from the library, but I'm definitely going to add this one to our personal collection.

Benjamin Franklin is awesome. Or, the scientific method is a way to learn about reality.