Miles is the Boss of His Body

Good but could have been better. 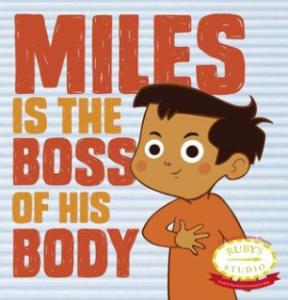 Miles flips out and screams, "Everybody! Cut! It! Out!!!" Then he tells his family, "I'm tired of being... touched in ways that I don't like. I'm six years old and I'm the boss of my body!" Then he stomps off to his room and shuts the door. A great quote: "Miles felt confused. He really loved his family, but he didn't feel like they were respecting how he wanted to be treated." It's hard to tell somebody to stop doing something when you know they're doing it out of love, but sometimes you have to set boundaries. Then his mother asks to come in. He's worried that he's in trouble, but everybody just tells him they're really proud. His father says, "No one should ever touch you in ways you don't want to be touched. Sorry, Dude."

Miles asks if it's okay if he doesn't want to hug or kiss somebody, and his parents say, "You can decide what feels right." Then everybody has birthday cake. Suddenly, the end.

It's a very important message to get across to children (and even some adults) because boundaries are important and sometimes even parents don't feel like they need to respect them and that's an important thing to remind parents of. I try to make sure not to tell my kids they "need" to give anybody a hug or a kiss. I try to ask them, although I remind them sometimes when we're leaving that it's their last chance. If they were ever to voice any opposition to that, I wouldn't make them. They have made that decision before, for whatever reason, only to want to hug and kiss the same person next time. It's their choice, and it's not a permanent decision unless they want it to be. But I don't feel like this book is thorough enough. It does give a great example of the problem, and what to do about it, but it might be suggesting that you don't get to decide until you're six. And the family's reaction was more like they'd never thought about it before than an understanding that they'd need to watch themselves in the future and change what they'd been doing for ages.

But it definitely provides children with a character to emulate. It's not completely realistic, but I feel like it could have gone further. It's good, but it could have been better.

Everyone is in charge of their own body, and they shouldn't be forced to allow other people to do things to their body that they don't want to do.