Any more than two, and you're the Crazy Cat Person. 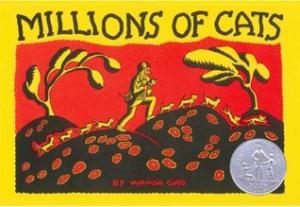 This is a bizarre book. There's a very old man and a very old woman. They're lonely. She wants a cat. He takes a walk, and he finds what is basically Cat Mountain, a hill literally carpeted with cats. He tries to figure out which one is the prettiest, but he thinks they're all pretty. So he takes all the cats home with him because he can't decide which one is the prettiest. So he arrives back at his house, with "hundreds and thousands and millions and billions and trillions of cats following him", and his wife goes, 'What the heck?! This is way too many cats! We can't feed this many cats!' So he says, "I never thought of that." She says, 'We will let the cats decide which one we should keep." So he asks them, "Which one of you is the prettiest?" Which sets off a massive cat brawl.

While this is happening, the man and woman run into their house to hide. When the noise stops, they come back out, and there's no cats anywhere. She says, "I think they must have eaten each other all up". Um, yuck. But they find one "thin and scraggly" kitten. They ask him, 'Why are you still here? Why didn't you get eaten up?' Because cats can talk in this world. And the cat says, "I'm just a very homely little cat." Basically, that cat has low self-esteem (as a cat owner, I can tell you that's pretty rare) and decided that he was definitely not the prettiest, so he didn't bother fighting and nobody fought him. So the man and woman adopt him, since he's the only one left, and treat him nicely and he gets better-looking. A pretty violent story.