My Body Belongs to Me

Body autonomy for the win. 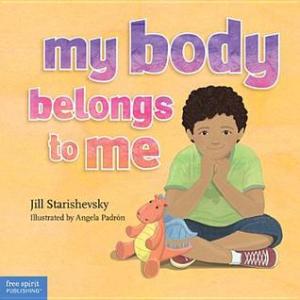 I maybe could have done without the rhyming, but it's not terrible. The rhyming isn't great, but everything else is pretty good. It's a first-person narrative of a child who explains that they have a lot of body parts, including private parts, and the reader has those, too. The child is rather ambiguous in gender, but I'm going to use "he" to avoid confusion here. Since it's written in first-person, the book can be easily read with the child as male or female (or anything else, for that matter). His Mom and Dad tell him that if anybody hurts him, he should tell the parents. At his Uncle Johnny's house, the uncle's friend comes over and touches the boy's private parts. He gets upset. The friend says it's their secret. The boy runs away, and tells his parents. They say he is really brave, and that they are proud that he told them right away. He mentions that if he was too scared to tell them, he could have told his teacher. It wasn't his fault. He didn't do anything wrong. It's his body.

Which is a really terrific message. I think it's very well executed. The artwork is decent. I mean, it's not going to win any awards, but it's self-consistent and clear what's going on in the pictures. The ambiguity in the child's gender is great, and he's also depicted as biracial. I love how it stresses that if someone touches you inappropriately, it's not your fault.

There are additional sections (the main text is brief and poetic) which go into suggestions for parents on additional things to talk about with their children, and tips for dealing with this situation, should it happen in your life. I actually learned something from this section: if your children tell you that they were sexually abused, don't get angry in front of them. Even if you're angry at the perpetrator, they may interpret it as anger at them. I never thought about that, and I'm sure I would be furious if it happened to one of my children.

I think this book is a great tool for teaching children about making sure others respect their body.

If somebody touches you inappropriately, it's not your fault. Tell someone you trust.