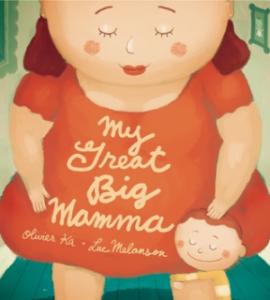 I had high hopes for this book. I really did. Because, well, I'm overweight, and I wanted to see how this book treated that topic. I came away from it feeling like this is not a book for children, it's for the adult reader.

It's basically about how the son of this woman who is "fat" likes her to be large. The first page: "My mamma is big. Very big. She is the biggest mother in the world." It goes on to a ridiculous amount. The child is basically a sycophant. The thing that he likes about her is that she's big and that she's cuddly. He doesn't seem to care about her personality, her behavior, or who she is as a person. He says, "Her kisses mean, 'I love you so much, I want to eat you right up.'I wouldn't even mind if she did eat me up." Gah! Ick!

It says sometimes when they walk down the street, children point at her and tell their parents how fat she is. "That makes me proud. If my mamma wanted to, she could pick up 20 kids at a time. But I'm the only one who gets to enjoy her." She's not muscular, she's fat. There's a difference. Just because she's big doesn't mean she could literally pick up 20 kids. God, this child is oblivious.

And then this happens: She says, "I have to lose weight. I'm going on a diet." She doesn't enjoy eating anymore, and she's sad, and he thinks it's silly that someone so big is eating so little, and when he asks her why, she says it's so she'll look "prettier". One great part of this book is his mental response, "That's crazy. She wouldn't be prettier. She'd be thinner, that's all." Then he imagines her as thinner, bonier, and less comfortable to sit on. He thinks the diet is stupid, so he goes on his own bizarre diet (like not eating hamburgers because "you could become a cow"). She gets worried and asks him why. When he says he's dieting because she is, she says, "You're perfect just the way you are." He says, "So are you. You're the most beautiful mamma in the world."

So because of that, she decides to give up her diet, and starts "eating lots again". She's happier. He says to her, "I like it better when you aren't on a diet." She says, "You know I only did it because of other people." Which other people? Haters? Or doctors?

This book feels like a list of excuses for a mother who doesn't want to lose weight to help her be happy with her choice. I try not to judge people's choices about whether they lose weight or not. It's incredibly difficult, and the rewards are questionable. But the choice to diet, or to stop dieting, is a complex decision that really shouldn't be influenced by the ignorance of a child. It feels like the book is sucking up to overweight people, mothers in specific, and it does it in such an over-the-top, flattering way, that it comes off as disingenuous. It doesn't say that it doesn't matter how much someone weighs. It explicitly says that being fat is better. Maybe that everyone should be fat. Even implying that she would love him less if she were smaller.

The fawning praise of every overweight aspect of the mother makes it seem less like the child is her son and more like a lover. It's just so bizarre. Maybe it made more sense in the original language?

I don't see anything good coming out of this book. It feels hurtful to me. It's trying so so hard to say that it's okay to be overweight, that it crosses the line and says that it's desirable to be overweight. Whenever you use a children's book to say anything is desirable, if it doesn't apply to everyone, you're entering the danger zone. Not all moms are overweight, and if a child whose mom wasn't overweight acted like this, it could be very destructive. I get what the book is trying to do, but it's going about it in entirely the wrong way.