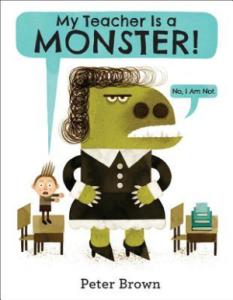 I really like the message of this book. There's a little boy named Bobby. His teacher's name is Miss Kirby. He acts up a little bit at school and the teacher yells at him and takes away his recess, so he thinks of her as a monster. On the weekends, he hangs out in the park. One Saturday, he sees his teacher in the park, and he tells her that it's really weird to see her outside of school. She agrees. Then her hat flies away and she gets very upset because it has sentimental value to her, and Bobby chases it and catches it and gives it back to her. She's very happy about that and then they play in the park a little bit. He shows her his favorite spot and she gives him a paper airplane to fly outside and they have a lot of fun. Basically it humanizes the teacher to the child, and in a way it humanizes the child to the teacher as well. She can still be upset with him sometimes, if he does things like throw paper airplanes in school. As the author's picture on the end flap says, "So maybe I can be a monster sometimes. Nobody's perfect."

For most of the book, the teacher is literally depicted as a green monster. It's interesting how as they talk and play in the park together, the teacher's image becomes more and more human, and by the end of their time in the park she's completely human in her looks. Like I said, it's a really great message. I think the illustrations are funny. I've definitely had that experience of interacting with the teacher outside of a classroom and it being a totally different dynamic. And not just that, but often when people are under stress, they can forget that other people are just as human as they are. In this particular case, it's from the boy's perspective and more specifically a message of, "Teachers are people too," but the teacher clearly gets a better understanding of the boy.

This is applicable in a general sense to many different relationships. Sometimes when I'm driving on the roads and I'm in traffic, I have to remind myself, "Wait, wait. These cars are all full of people who are human beings who have motivations and feelings. They're humans." When you're interacting with people in a prescribed setting, sometimes it's easy to forget and just treat them like automatons. But you have to remember that every person around you has the same kind of inner life as you do. Even if they don't have the same wants and desires as you, they still have wants and desires, and they're still worthy of respect.

Even if teachers sometimes act mean, they're human beings too.