Don't be arrogant, or a hermit will turn you back into a mouse. 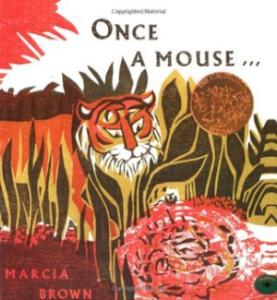 What? Okay... sure. This is a fable from India, I guess? It doesn't make a lot of sense. It doesn't even work as a "pourquoi tale" because it doesn't seem to be explaining the reason for anything.

There's a hermit in the forest. He sees "a mouse about to be snatched up by a crow. He hurrie[s] to help the poor little animal, and tearing him from the crow's greedy beak, comma he carrie[s] him off to his hut in the forest, where he comfort[s] him." Why doesn't he care about the crow? The crow's not "greedy," it's just trying to live and survive. Just because it's a carnivore doesn't make it less deserving of life than the mouse. Anyway, he rescues the mouse and he keeps him as a pet for some bizarre reason. Later, a cat comes by and that's dangerous to his pet mouse. So this hermit, who, we are suddenly informed, has magical powers, turns the mouse into a cat as well. Then there's a dog barking in the forest at night and the cat is afraid of the dog, so the hermit changes him into a dog. Then a tiger comes by and attacks the dog, and the hermit, who is nearby, changes the dog into a tiger, "a handsome, royal tiger."

But apparently that makes the the mouse/tiger extremely proud. "All day long he peacock[s] about the forest, lording it over the other animals." The Hermit gets mad at him and says, 'Without me, you'd just be a mouse,' and the tiger is "offended and humiliated," oddly, and "he forg[ets] all the good he had received from the old man," and threatens to kill the the hermit. But "the hermit read[s] the tiger's mind," and changes the tiger back into a mouse and sends him away. The mouse runs off into the forest, "and was never seen again." The story then circles back to what the hermit was doing at the beginning, "thinking about big and little."

What? What happened in this? Okay, the mouse's life is really dangerous because he's a small prey animal, so the hermit changes him into various larger and larger predators, until he gets to the top of the food chain, at which point he's prideful for no apparent reason. And then he's ungrateful, and the hermit's like, 'Fine, go back to being a mouse.' Presumably the mouse gets immediately eaten by the next passing slightly larger animal.

I honestly don't know what that has to do with big and little. Technically a cat is larger than a mouse, but that's not the only reason a cat would attack (and eat) a mouse. Most turtles are also bigger than mice, as are hamsters, but they're not dangerous to mice. And tigers are going to eat anything. A tiger would have eaten the hermit, if it had seen him. It's weird in a story to have animals with an internal monologue. Are all tigers prideful? Are they supposed to be that way? Is that what this story is saying, that tigers are all prideful? Was the tiger that attached the mouse/dog prideful? What does that even imply? Or is it saying that you shouldn't be proud of being powerful if you didn't earn your power?

Bigger animals are more prideful and less grateful? Or maybe, don't be proud of what you didn't earn?