These goblins and their weddings, amirite? 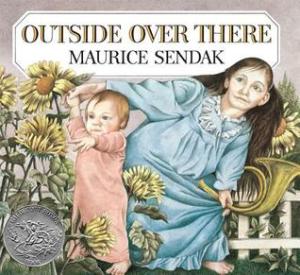 More reminiscent of "Where the Wild Things Are" than "In the Night Kitchen." A girl, probably about 9 or 10, named Ida, is playing music on a horn to calm her baby sister. Her father's a sailor off at sea, and her mother is just sitting in the arbor for some reason, probably just sick and tired of taking care of a baby. So Ida isn't looking at her sister, and some goblins come and steal her little sister and replace it with a baby made out of ice. She hugs it, and the ice-baby basically melts. So she takes her horn and chases after her sister and the goblins (who are going to marry her sister off to a goblin?) are actually all babies. Ida plays music on her horn and all the goblins start dancing, and eventually they dance so fast that they turn into a stream of water, but her sister is just chilling in an egg shell, because normal babies don't dance when music is played. That's kind of funny, because my youngest son has danced to music, in his way, since he was able to move around. Maybe her sister's too young to walk. So she rescues her baby sister and goes home.

It's kind of dreamlike. It's a little bit surreal. The main character makes some mistakes, but listens to the advice from her father's voice from the sea telling her how to find and rescue her sister. There's definitely a loving relationship between the older and the younger sister. There's bravery on the sister's part to rescue the younger sister. And she takes responsibility and owns up to her mistake of not paying close attention to her sister by going to her rescue. I think it's pretty cool. I'm not sure if there's really any cleverness on her part, necessarily. She doesn't seem to come up with the idea of playing the horn on her own, although she does take it with her. But it's more like a dream, where the motivation for anything is rather unclear. The artwork is more realistic than Sendak's other popular books, almost like pastels or watercolor (I'm not sure what medium was actually used). It's pretty likely that he used models for these characters. All the goblin babies are, of course, naked. You can't really see much, though. One of them appears to be a girl, but other than that nothing is visible as far as I can tell.

Like I said, I really liked the relationship--the tenderness and compassion--from the older sister to the younger sister. Dealing with babies is hard. The mother's clearly mentally checked-out already. The background of the images is interesting, as well. The goblins are there from the beginning, just small creatures with grey robes on and hidden faces. When the baby gets kidnapped, the sunflowers outside the window start going a little nutty and encroaching inside the window. There's a window on the wall, and the vista visible through it changes throughout the whole series of scenes where Ida realizes that her sister's been replaced by the doppelganger and planning to go after her. It starts with a ship sailing, and then the ship sinks near a rocky area, then the ocean becomes more calm, and then more stormy. When she leaves to rescue her sister, she falls backwards out the window, which apparently gives her the ability to fly, and there's a really fascinating scene where she's flying through the air in this raincoat with her horn, and it looks like she's an angel in a Renaissance painting, from a fresco or something. There's breaking clouds here and there, and caves in the distance.

Take responsibility for your actions.