No son of mine will be helping people get home in the dark! 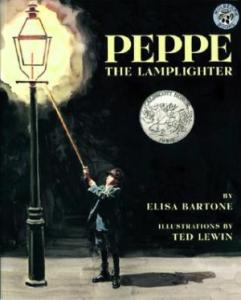 It's kind of about disagreement between generations. A little boy named Peppe needs to get a job because he doesn't have a mother and his father is sick and he has six sisters and needs to support the family. He tries to get a job in lots of places, and finally the man who lights the streetlamps at night says that he is going to Italy and that Peppe can light the lamps for him so he still has a job when he returns. Peppe thinks this is wonderful and goes home and happily tells his family that he has a job, but his father is ashamed of it, presumably because it is outdoor work, and tells his child that he is going to "belong to the streets" and that he didn't move to America from Italy to be a streetlamp lighter. So at first Peppe is very happy about lighting the lamps and treats each one of them like it is a candle in church where he lights candles for people to hope for the future, but his father's shame over his job eventually gets to him and he becomes less and less proud of the job, and one day he just doesn't light the lamps anymore. That night, his youngest sister doesn't come home, and then his father says, "You know what, it's an important job. You need to go out and light the lamps so your sister can find her way home." So he goes out and lights the lamps. On the last one, he finds his sister huddled under it, asking him why he didn't light the lamps. She says when she grows up, she wants to be a lamplighter like him, because he "scares the dark away." So basically, his father finally understands the importance of the job, including why it is important to his son, and changes his mind and grows as a person, which is a really great ending.

Sometimes grownups are stubborn, but sometimes they realize that they made the wrong decision and change their minds. It's a difficult thing for everybody involved, but it does happen and it's good.

Don't be ashamed of what you do. As long as you're helping people, you have something to be proud of.