Pierre: A Cautionary Tale in Five Chapters and a Prologue

As the title of another book says, children are delicious. 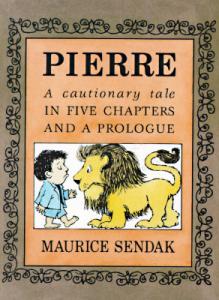 This is a weird book. I'm not sure if I'd label it a chapter book or a picture book-- it's kind of a cross between the two. It's written entirely in rhyme. It's not very long, but it's also not very big.

There's a little boy named Pierre who only says, "I don't care." His mother gets him up in the morning and feeds him breakfast, asking him questions like, "What do you want to eat?" And tells him not to sit backwards in his chair or to stop pouring syrup in his hair, but he just keeps saying, "I don't care." His dad tells him to stop standing on his head so they can go to town, and he doesn't so both parents leave him at home alone. Then a lion comes into his house and looks at Pierre and says, "Would you like to die?" and Pierre says, "I don't care." The lion repeatedly stresses that he is planning on eating Pierre, and implies that Pierre will die, but Pierre just keeps saying, "I don't care." So the lion eats him. When Pierre's parents return, the lion is in Pierre's bed, looking ill. They attack the lion and ask him where Pierre is, and the lion says, "I don't care." From that, they realize that Pierre is inside the lion, so they take him to the doctor, who then shakes the lion upside down. Pierre falls out of his mouth and is thrilled that he's not dead. They ask him if he's okay, and he says, "I am feeling fine, please take me home, it's half past nine." The lion says, "If you would care to climb on me, I'll take you there." "Then everyone looked at Pierre, who shouted, 'Yes, indeed I care!!'" And they ride the lion home. At the end, it says, "The moral of Pierre is: CARE!"

It's just goofy in a way that makes me think of "A Very Special House" (also illustrated by Maurice Sendak). It parodies other moralizing stories where the child is a brat from the beginning and gets his comeuppance, realizing that maybe he should be nicer to people. On the other hand, it makes me think how much more I like this book than the book "Whatever" by William Bee. I'm not sure whether "Whatever" is a commentary on "Pierre," but it similarly features a parent getting frustrated with a child's apathy (in Bee's book, the child only repeats "Whatever"). At the end of "Whatever", the child is eaten by a tiger, but by that point the father has become as blase as his son, and responds to the horrifying occurrence with his own, "Whatever." In contrast, Pierre's parents do not stop loving him simply because he is going through an annoying phase. While neither book is particularly realistic, and the child in "Whatever" seems to still be alive within the tiger as well, I rated that book much lower because I don't want to give my children the message that I will stop caring about them. Because, in my case, it's simply not true. While I wrote this review while hiding inside my bedroom to get a break from my screaming preschooler while his father took care of him, I still love him. I would be sad if a lion ate him, no matter how much he screams.

It's important to care about some things.