Princesses can be knights, too. 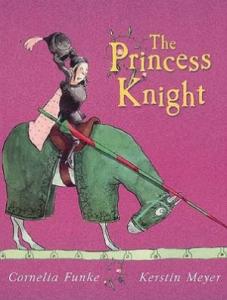 It's cute. Definitely a good message of female empowerment. I'm not sure it would resonate well with boys who read it because of that, but it's more of an answer to traditional fairy tales. It's not saying girls are better than boys, it's just saying that girls shouldn't be treated as property.

A king has three sons, who he wants to be better at fighting and jousting than his knights. He has a daughter, but the queen dies in childbirth, so he raises the daughter the same way as his sons. She's not very good at it, because she's so small, so her brothers make fun of her. She sneaks out at night and teaches herself in secret. Though she's not strong like her brothers, she's small and nimble. She's clever about fighting, and nice to the animals instead of ordering them around. The king says, "I'm going to have a jousting tournament because you're turning sixteen. And the prize is going to be your hand in marriage." She gets mad, and he locks her in the tower for a day, and then she comes out and is like, "Okay, fine." And she has her nursemaid dress up as her and enters the tournament and wins, and then her father is speechless. She says, "Nobody can win my hand in marriage." And then she leaves for a year and a day, and then when she comes back her father has accepted the whole thing, gives her a horse, and as an afterthought it says she married the rose gardener's son and lived happily ever after.

Girls shouldn't be treated as property.