We all go through rough patches. 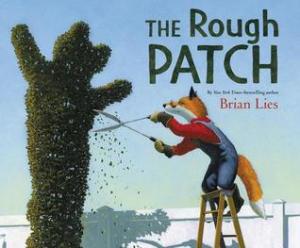 It's about the death of a beloved pet. An anthropomorphic fox named Evan has an unnamed non-anthropomorphic dog. He loves his dog very much, and they're always together. They like to work in Evan's huge garden, which has all kinds of things in it like radishes, carrots, beans, and other kinds of vegetables and fruits. One day, Evan's dog dies, and Evan "la[ys] his dog to rest in a corner of the garden, and nothing was the same." It's a very poignant book, very powerfully done. He misses his friend so much that he takes a hoe and just destroys his entire garden, and carts it all off. A bunch of weeds start to grow, "Itchy ones. Spiky and prickly ones. Foul-smelling ones. These weeds suited Evan just fine, so he took care of them." Thistles and things with thorns, which Evan cultivates. "If Evan's garden couldn't be a happy place, then it was going to be the saddest and most desolate spot he could make it."

One day, a pumpkin vine comes in from under the fence. He thinks about chopping it with his hoe, but realizes that it's actually rather prickly and twisty, so he decides to cultivate it as well. He even clears the weeds from its path. He grows a massive pumpkin, which he puts in his truck and takes to the fair. At the fair, he sees some of his friends. "It felt good to be out again, even if it wasn't quite the same." And his pumpkin wins third place at the fair, and the prize is either ten dollars or a puppy, and Evan just wants the money. He goes up to get his money and "hear[s] a scrabbling sound inside the box and [thinks] it wouldn't hurt to just... look." The last wordless page is him driving back home in his truck, a puppy in the seat next to him.

It's a whole cycle of grief. It talks about the time before, where he loves his dog, and they're best friends and go everywhere together, and then his immediate grief over the death. It's followed by his anger, and the sense that he clearly wants to wallow in it, and let it take over his whole life, represented by the garden. It's like he doesn't feel it's fair to the memory of his best friend for him to move on. But slowly, a new kind of feeling begins, like a new plant sprouting, and he makes the decision that it's similar enough to how he was feeling before that he's okay with it. And it's like a crack in a wall, and slowly he starts feeling more normal again, normal enough to leave his house and go to the fair. It's okay for him to feel all feelings, not just the sad ones. And he finds that he's maybe ready to accept a new friend into his life. Not as a replacement for the old one, but as a whole new relationship. Maybe he's ready to love again after being hurt. And the illustrations are just gorgeous, which is icing on the cake for me.

Grief takes time to work through, but you will come out the other side.

Where you and I differ

I probably wouldn't have liked the book, because I hate sad books about death, and also, I don't like stories where one thing "represents" another.

That said, this is just my opinion, and it's nothing against you or the review.

I have nothing to offer on the first point. But as far as the second point goes, I'd say the garden can be viewed entirely as a garden, and the book still makes sense. It's not so much that it "represents" his internal state of mind, but that it reflects and parallels it.