I wish this fairy tale would never be heard from again. 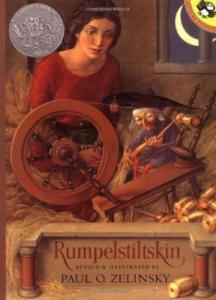 I've never really cared for the story of Rumpelstiltskin. I don't think it's a coincidence that Disney has never made a feature film out of it, although they've picked a lot of Grimm's fairy tales like Snow White, Sleeping Beauty, and even Rapunzel. Rumpelstiltskin is one of those stories where a woman ends up in trouble through the fault of some man who owns her like property. She is first forced to sacrifice everything she owns, then barely avoids sacrificing everything she holds dear by sheer luck. There's no cleverness in this. There's no possible character development for the story as written. The inner flap of the book bafflingly describes the character of Rumpelstiltskin as "an impudent, sympathetic, infuriating creature." Sympathetic? What is possibly sympathetic about this character? In this book, he just barely gives her an out, after she sobs piteously over losing her child, and it's extremely clear that he doesn't expect her to ever guess his name. It's more like he's pridefully taunting her than anything else. And if they mean sympathetic in the sense of someone that the reader should sympathize with, that's just clearly false.

For those few who are unfamiliar with the Rumpelstiltskin story (or perhaps so familiar that they aren't sure which version this is), this book begins with a miller and his daughter. The miller runs across the king in town, and to impress him, he blatantly lies to him: "I have a daughter who knows the art of spinning straw into gold." Well, to his bad luck, the king is insanely greedy. Since he's the king, he basically gets an infinite power of eminent domain, and invokes it on the daughter. The king puts the daughter in a room full of straw with a spinning wheel and more or less says, "If this straw isn't gold in the morning, I'm gonna kill you." Of course, she just starts weeping inside the room. She's sure she's going to die. But a little man appears, and when she tells him her situation, he offers to spin the straw into gold in exchange for her necklace. The king is thrilled, but not satisfied, and sends her to another room the next night, with the same threat. The man returns, and she trades her ring for his help. On the third night, the king puts her in a third room of straw, but this time, tells her he'll marry her if she can do it again. Basically marrying the goose that lays the golden eggs. The man returns, but this time she has no more jewelry. He requests her first-born child, and after some thought, she acquiesces, realizing that she might not even have a first-born child (and if you want to really read more into this, at the time she might have had difficulty surviving the birth, and so wouldn't be around to be upset). "And as she could think of no other way to save herself, she promised." How she planned on keeping up this charade isn't discussed. Sure, the king happens to stop at three rooms full of gold for unknown reasons, but what if he had continued? What horrible things would the miller's daughter be forced to trade away?

Anyway, the man spins the straw into gold, the king is satisfied, and the miller's daughter becomes queen. After a year, she gives birth to a boy (who, according to most feudal law, is heir to the throne), and then one day the little man appears in her room and says, "Give me what you promised me." She tells him he can have all the treasure in the castle (which is actually not hers to give; it belongs to the king) just let me keep my child. He declines. She is so she is so upset that he is "moved" and gives her three days to find out his name. If she succeeds, she gets to keep her own child. She spends one day thinking up all the names she knows, and tries them on him that night, but none of them are correct. The second day, she asks everybody in town for more names. None of those are correct either. "Now the Queen was truly frightened, and she sent her most faithful servant into the woods to look for the little man." The servant she finally finds him flying around a great fire riding a cooking spoon (like a witch would ride a broom) and singing a weird song about how his name is Rumpelstiltskin, and the servant runs back as fast as she possibly can. The queen is overjoyed, and reveals the name to the man when he returns on the third night. He screams, "The Devil told you that! The Devil told you that!" "And in a fury he jumped on his cooking spoon and flew out the window." "And he was never heard from again."

This story is so frustratingly misogynistic. That's not Zelinsky's fault, one could argue, although why did he pick this story? He wanted to draw gnomish little men? It's a popular story. It's a fairy tale that's part of our culture, but there's just nothing redeeming about it. She ends up married to the horrible king who kept threatening to kill her. When Rumpelstiltskin returns, it's not like she's enjoying her life. He's coming to take the one thing she has that in some small part belongs to her. It's likely that for the original creators and listeners of the tale, the most worrisome aspect is that a strange forest creature will have control of the heir to the throne. But as a modern woman, it's just horrifying what this poor woman has to go through. None of the characters do anything remotely altruistic. She's not given a chance to be, and everyone else is a greedy, scheming, sleazebag. There's nothing good about the text. What kind of moral could this even impart? "Don't lie to the king, he might take your daughter"? That happens in the first two pages. I guess it could be worse if the queen didn't try to keep her own child.

The illustrations, on the other hand, are gorgeous. Zelinsky is an amazing artist. I understand his desire to illustrate a traditional tale, but there are plenty of better ones out there. Zelinsky adds a note at the end about different versions of this story, like the one where the king accidentally discovers the name and happens to mention it to his wife, or the one that starts off with a girl who can't stop spinning flax into gold (she's trying to make linen). I wonder if this story is just a product of its time or if it was just as weird back then. As I said, the story is one that is known in this culture, so my kids are going to learn it at some time. Maybe someone could make the argument that they might as well experience it with breathtakingly beautiful art, but it might be best for them to just hear a brief summary instead.

Life sucks unless you're the one in charge (especially if you're a woman). Good luck, you'll need it to escape the capricious whims of the powerful.

tell me is he good or bad

Traditional version not for children

In the traditional version of the story, Rumpelstiltskin gets so angry that he rips himself in half. its a horrible story and not for children and I have no clue why our school would have it listed as appropriate storytime reading for 4-6year olds.