The Spider and the Fly

Will you walk a little faster?" Said a whiting to a snail. "There's a porpoise close behind us, and he's treading on my tail. 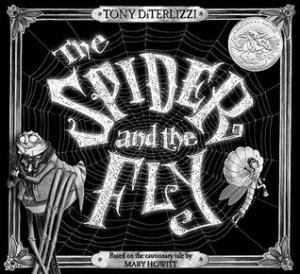 It's a strange book. The poem, "The Spider and the Fly" was written in the 1800s, and this is a modern illustration of that poem. Although the cover says that it's "based on" that poem, I don't believe DiTerlizzi changed any of it.

Personally, I'm more familiar with "The Lobster Quadrille", also known as "The Mock Turtle's Song" from Lewis Carroll's "Alice's Adventures in Wonderland", which is a parody of "The Spider and the Fly." (Pretty much every poem anyone recites in the Alice books are parodies of something, the originals having been somewhat forgotten by time.)

Most of us, however, have probably heard the opening lines: "'Will you walk into my parlor?' Said the Spider to the Fly." The story consists of a spider trying to coerce a fly into his house, but the fly keeps declining since she knows that anyone who goes into the spider's house doesn't come out again. Then the fly says, "And bidding you good morning now, I'll call another day." But why is she even coming back? I don't know. Since the spider knows she's coming back, he makes a web, and then comes out and flatters her a whole lot, then she comes into his house and he catches and eats her. The end.

It's kind of cute that DiTerlizzi writes kind of an epilogue, saying, "What did you expect from a story about a spider and a fly? Happily ever after? Spiders are trappers, for goodness' sake! We've been doing it for generations and we're quite good at it." And the last paragraph continues, "So what does all this talk of spiders and traps have to do with you? Be warned, little dears, and know that spiders are not the only hunters and bugs are not the only victims. Take what has transpired within these pages to heart, or you might well find yourself trapped in some schemer's web."

It's a little bit repetitive, like most writing of its time. And it uses archaic language. "For who goes up your winding stair can ne'er come down again." "Will you please to take a slice?" Just weird phrasing.

The illustrator has done his illustrations, as he says, based on Hollywood horror movies, and you can definitely see similarities to Addams Family characters and Lon Cheney. His work is pencil drawings on Bristol board reproduced in silver and black. The many ghost characters were done in graphite and then they used Photoshop to make them transparent, which is a cool combination of traditional and modern techniques to create a unique look.

It's a cautionary tale, but it's not overly preachy, which is surprising for something written that long ago. He's just very persistent, and the only time when it outright states the moral is the last two lines: "Unto an evil counselor, close heart and ear and eye, and take a lesson from this tale, of the spider and the fly." Like the spider says, it's not a twist ending. Nowadays, we don't expect the endings of kids' stories to be quite as dark. Evil wins. One of the main characters is devoured by the other. In retrospect, horror is an obvious motif. DiTerlizzi's style in this book is very reminiscent of the 1920s and 30s. The fly, a female character, has a choker made of pearls, a very traditional symbol of elegance, with a pillbox hat and white gloves. She gasps into the back of her hand like an old movie star.

The spider actually has additional eyes on top of his head to make him both human-looking, but keep the number of total eyes at eight like a real spider. There are all these tiny details in the images like that, which make the book fascinating to look at. The creepiness is more quaint than disturbing, and probably wouldn't bother a child.

The biography of Mary Howitt, the author of the poem, at the end of the book is a nice touch. She was a very powerful author during her time (she passed away in 1888), especially for a woman, and had an impressive career.

Beware of people who try to flatter you to trick you into doing things.