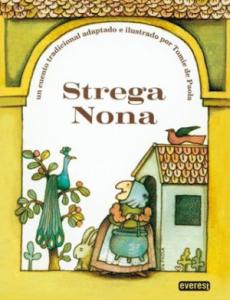 It's kind of a silly book and doesn't seem to really take itself seriously. A witch named Strega Nona lives in Calabria (an actual place-- a region in southern Italy). "Even the priests and the sisters of the convent went [to see her], because Strega Nona did have a magic touch." She is getting older, so she advertises for someone to help her around the house. Her ad is answered by "Big Anthony, who didn't pay attention." Well, he pays attention to begin with. She gives him a list of chores to do, and compensates him with room, board, and payment. But she tells him never to touch the pasta pot. One night, he sees her singing a magic spell to the pot, it fills up with pasta, and then she sings another song to stop it. (He doesn't see her blow three kisses into it afterwards.) The next day, he goes into town and tells the other townsfolk about it, but they don't believe him and make fun of him (despite knowing that Strega Nona has legitimate magical powers). So he waits two days for Strega Nona to leave town, when he has a chance to prove it to them.

He starts the pot up, invites the villagers over for food, and they're impressed and declare him a hero. Until he can't actually stop the pot and pasta threatens to overwhelm the whole town. Strega Nona arrives home in the nick of time and stops the pasta, at which point they turn on Big Anthony and threaten to "string him up" (for those not in the know, this means they want to hang him). Strega Nona stops them, saying that "the punishment must fit the crime", and hands Anthony a fork. "All right, Anthony, you wanted pasta from a magic pasta pot, and I want to sleep in my little bed tonight. So start eating." So he eats all the pasta, and the last scene is him sitting outside the house looking very unhappy with a full stomach, and her sleeping in her bed inside.

So he disobeys her, but she doesn't punish him cruelly for it. His "crime" doesn't deserve death. The only person he really wronged in this case is Strega Nona, because it was her pot. The pasta didn't actually hurt anything. He didn't try to attack the town or anything. He's not a malicious person; he just doesn't think of the consequences, and was pushed too far by the bizarrely skeptical townspeople.

Don't be vindictive. Or, don't take things without permission.