Groucho's joke makes sense if the elephant was tiny. 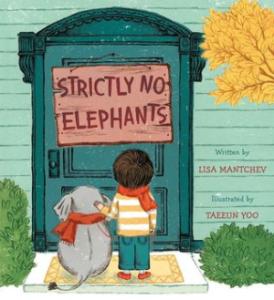 This is a sweet book. A little boy has a tiny elephant for a pet-- he's about the size of a large dog, about shoulder height on this little boy. Their interactions how very kind both of them are to each other. The elephant will hold the boy's umbrella in the rain, and the elephant is afraid of the cracks in the sidewalk so the little boy helps him over them.

It's pet club day and he takes his elephant to the pet club and the sign on the front door of the pet club says "Strictly no elephants," which makes both of them very upset. As they're leaving, they run across a girl with a pet skunk who says, "You know, they don't want any skunks either even though there's no sign for it." She adds, "He doesn't stink or anything." They decide to start their own club. "'Come along,' I say, making certain that my tiny elephant follows me. Because that's what friends do: never leave anyone behind." Their their club has a lot of kids in it with different kinds of pets. There's a narwhal in a fish tank, a penguin, and a hedgehog wearing boots, among other animals. There's a tree house and one of the kids says, "We can play here." They make a sign on the front that says, "All are welcome." And the boy says to the reader, "My tiny elephant will give you directions if you need them. Because that's what friends do."

And on the last page it shows one of the kids who was actually in the previous, no-elephants club coming to check it out and she looks kind of impressed by the clubhouse. It's just really sweet. The boy is discriminated against for stupid reasons, and realizes he's not the only one with this problem and needs to find other people who want to be his friends. Their new club isn't a vindictive thing, it's just because they want to hang out together. Everybody else is welcome if they want.

The illustrations are cute. The text is well-written, if brief. It's just short and sweet.

Don't let the haters get you down. Find people who will accept you for who you are.