Doing the right thing is the least you can do. 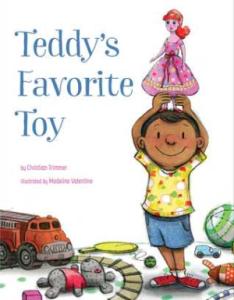 It's about a boy named Teddy of ambiguous racial heritage whose favorite toy is a doll named Bren-da, Warrior Queen of Pacifica. It's cool that she not only does traditionally feminine things like being well-mannered at tea parties and dressing up, but she also "Has the sickest fighting skills."

I'm not that thrilled about this book's attempt to use slang. There's a page where Bren-da is dressed up in a specific outfit and the text says, "And she is able to pull off a number of different looks, like this one." And Teddy is off-page saying, "Yas, Queen!" It just made me cringe a little.

Anyway, Bren-da's leg breaks off one morning, so Teddy tries to fix her but can't figure it out before he has to leave for school, so he wraps her in tape and leaves her on his bed. His mother sees that his room is a mess, so she cleans it up, and doesn't realize that the bundle on his bed is his favorite toy, so she throws it in the trash and it's garbage day. When Teddy gets home, he can't find Bren-da he tells his mom what he had been doing that morning, and she realizes that she accidentally threw the doll away, so she says, "Stay here," and she goes off like a warrior and chases after the garbage truck in a rather ridiculous, unrealistic, yet funny way. She somehow manages to catch up to the garbage truck, despite the fact that Teddy must have been at school for several hours, and she pulls Bren-da out of the garbage bag, still in the open back of the truck.

When she comes back with the doll, Teddy again says, "Yas, Queen!" but this time, to his mother. Her escapades in rescuing the doll are described in a clearly parallel way to the way the doll is described. She displays good manners. She performs impressive moves. She looks fierce. The obvious implication is that Teddy's doll is such a strong woman because his mother is an awesome strong woman, too. It's never said what his mother's name is (maybe "Brenda"?).

That night, Teddy and his mom play in his bed with Bren-da and the last page states, "It was cool."

It's not very long, and it's not a complicated storyline. It's not 100% realistic, either. But the best thing about it is that his favorite toy is a doll, and absolutely nothing is mentioned about it being unusual. He is a boy. He's got a bunch of toys, but the doll is his favorite. It's the story of how he lost the doll and was reunited with her. It's not the story of how some other character came to accept the fact that he's a boy who plays with dolls. Nope. It's just a matter-of-fact thing. And the doll's personality is great. Some traditionally feminine things, some non-traditional things. Just like actual human women, who vary in their "femininity." Since it's a children's book, and not necessarily aimed at older children, it doesn't go into a lot of detail, and it's a bit sparse, but everything that's there is great.

Moms are awesome and will do what is needed to help you.