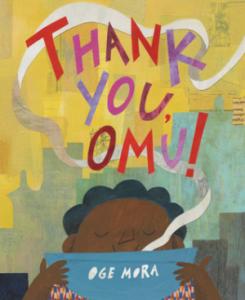 This is an "own voices" book (the author is from Nigeria), and it's a really sweet story. An old woman named Omu is starting to make red stew. The cooking takes all day. A little boy knocks on her door and says that he smelled the stew and it smelled very delicious. "She was saving her stew for dinner, but she had made quite a bit. It would not hurt to share." So she offers him some and he has a little bit, and thanks her and leaves. He is followed by a stream of people who smell her stew cooking and ask for a taste, including a white female police officer, and "even the mayor stopped by!" She feeds them all a bit. It's kind of like the reverse of The Little Red Hen. At the end of the day, it's finally dinner time but she has no more stew. She's sad, and she sits at the table with her empty pot, until another knock comes on the door and she sees every person that she fed that day. She says, "I'm sorry, everyone!" "My thick red stew is all gone. I have nothing left to share." But the little boy who first came by says, "We are not here to ask... we are here to give." And in a beautiful scene, all the visitors have brought food or gifts and they eat, dance, and celebrate. "That that dinner was the best she had ever had."

In the author's note it says that in the Nigerian language, "Omu" means "queen", but for her it means her grandmother. And she remembers her grandmother as a very sharing, giving woman who loved to cook, and who invited everybody to come share a meal with her. The book reminds me a bit of Sorche Nic Leodhas's "Always Room for One More" where the main character is just so giving and compassionate that it temporarily causes them problems, but the recipients of their generosity give back and the main character is better off afterward in an extrinsic sense as well as intrinsic. "Thank You Omu" is much more realistic.

It's got a great message. It's important to be compassionate. It's important to share with people what you have. Ideally you wouldn't share so much that you have none for yourself, but it didn't seem like she was completely out of food at the end of the day, more like she was disappointed because she was really looking forward to eating the meal she had made. And in that moment, everything feels tremendously unfair, not that she resents it. But it's temporary. That's one thing I hope for in life: that unfairness and imbalance are temporary, and that they will be restored. That equality and kindness and compassion will be shared by everybody. Obviously that's not always achievable, but there are times when it is. And I would rather teach my children to share what they have than to um hoard it for themselves. It's not to say that everything in the world is transactional, or that it should be.

But in my house we teach our children to say "Thank you," not because it's polite, but because it makes the other person feel better. And if they did something nice for you, you want to make them feel better, if for no other reason than because it will make them want to do it again. Giving people compliments and positive feedback-- being nice to others-- can help them be nicer to you. And being thankful, and showing your gratitude to others, is a small amount of reciprocation for what they've given you.

Be generous and other people will want to be generous in return.