What Makes a Baby

So determined to be inclusive that it forgets to be accurate or useful. 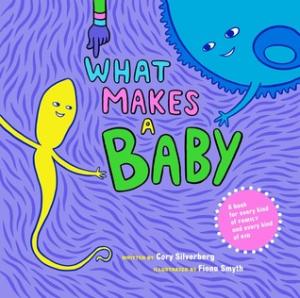 This is another one of those books about reproduction that leaves out all the important parts. It's easy enough to say that some people have sperm in them and some people have eggs in them and then you put the sperm and the eggs together and then you put them in a uterus (which some people have) and then a baby may or may not develop out of that. That's not hard to talk about. Biologically, it might be hard to understand, but most people wouldn't blush at saying that sort of thing. The hard part to talk about is the sex part. And this book just glosses over sex like it's not even a part of having babies. Okay, so it's true that not all babies are conceived via sex, but the vast majority of people in the world have sex at some point in their lives. It's important to point out that babies might happen because of it. There's a section called "For the grown-up reader" and it specifically says, "It doesn't include information about sexual intercourse, donor insemination, fertility treatments, surrogacy, or adoption." Those are the hard parts! I don't need a book to help me explain the easy parts! It's not hard to say something like, "Your daddy planted a seed in your mommy." And this book is even less detailed than that. "Not all bodies have eggs in them. Some do, and some do not." And the things it deigns to discuss, it does strangely. The egg has "stories all about the body the egg came from." Which is a metaphor that kind of describes DNA? But not really? DNA isn't really a story about the body. It's more of a blueprint, or even a parts list, of how the body needs to be built. And the fact that it mentions uteruses separately from eggs makes it seem like at least three people are needed to make a baby: one for the egg, one for the sperm, and one for the uterus. Over 99% of the time, the uterus and the egg come from the same person. Certainly, all three of them cannot come from the same person (at least with current technology), and I'm not sure it's biologically possible for the sperm and uterus to come from the same person. This kind of vagueness, while certainly inclusive of transgender people and intersex people, just leads to confusion. How is a child supposed to know whether or not they have a uterus? Uterus and ovaries are kind of a package deal, unless there are rare complications.

So the sperm and the egg have "stories" inside them. The illustrations imply that the stories are about the life that the parent has lived up until that point (showing a puppet show, and a film strip or series of photos of the mother, for example), which is absolutely inaccurate. And "when an egg and a sperm meet, they swirl together in a special kind of dance. As they dance they talk to each other. The egg tells the sperm all the stories it has to tell about the body it came from. And the sperm tells the egg all the stories it has to tell about the body it came from. When their dance is done they are not two things anymore. They danced around and shared so much that they became one brand new thing." Sort of a cute metaphor, but that's not how it works. They don't "tell each other" anything. They combine together on a cellular level, creating new chromosomes that give directions about how to build a new body. It's kind of pointless to talk about the "stories" or DNA, without explaining why they're important, and how they work together to make the new thing. How the DNA of the children relates to the DNA of the parent, and why children often look like their parents in certain ways.

Then it talks about the baby developing and getting bigger, and then how sometimes the baby is ready to come out on its own, or sometimes a doctor decides that it's time. Then, "Some babies are born by coming out through a part of the body that most people call the vagina." MOST people? I mean, yeah, slang terms exist, but if we're talking people who speak the English language, EVERYONE calls it that. It's like saying, "You see with an organ that most people call the eyes." Not. Accurate.

It mentions cesareans, which is good. It mentions that sometimes the birth hurts (an understatement, but accurate). But their lack of talking about adoption comes back to bite them here, when they're not vague enough. "Who was waiting for you to be born?" the book asks the reader. For adopted children, they might not know. That might be a painful question for them. I get that it's trying to tie the disjointed bits of the book to the child listener's life, but that's a hell of an assumption. "Who helped to bring together the sperm and the egg that made you? Who was happy that it was YOU who grew?" Maybe the mother wanted a girl instead of a boy. It happens.

It's just so bizarre, the things that the author decides to include and the things that they decide to leave out. It's not very useful if all it does is tackle the easy part. If I bought this book hoping that it would help me explain sex to my children, I would be sorely disappointed. Because it does not do that. It provides an extremely brief overview of the biological components of making babies, and that's it. I respect their attempt to be inclusive of all genders, but their execution leads to distortion and confusion of statistically relevant facts.

This book was intended to be first of a trilogy.

I found the book pretty vague too, but here's some context: Apparently there's a follow-up book for children 8-12 that gets more specific (or so I am told, I haven't read it). It's called "Sex is a Funny Word." A third instalment for middle schoolers is finally getting released next year called "You Know, Sex."

I suppose it's reasonable that way.

I just feel like a book which is supposed to help parents talk about hard-to-talk-about subjects should do more of the hard work.