The Wolves in the Walls

Great book, just not for the younger crowd. 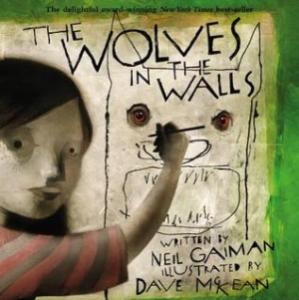 I'm really confused by this book. I'm kind of of two minds about this book. Part of me says it's terrifying for small children, and part of me says that it's gorgeous and meaningful, which I guess is par for the course for anything having to do with Neil Gaiman. I've read some of his novels and I always come away completely baffled, and his stories and graphic novels involve unexplainable and horrific things happening. He's the guy who wrote Coraline, for heaven's sake. One one had, this is the kind of thing that children can easily get nightmares from. On the other hand, it's really well written. But I absolutely hated the book Animal Farm, but I could totally tell that George Orwell was an awesome author. Execution: 100%. It's just that the idea is way more disturbing than I think most children would be comfortable with, unless they're the kind of kids who are totally into like scaring the pants off themselves. I guess there are children like that. But definitely not for preschoolers, though. My kid already has enough trouble sleeping. I don't need him to be afraid of "wolves in the walls." And the surreal style of the illustrations definitely doesn't help, because it's too realistic. It's abstractly realistic, done in mixed-media, and it's gorgeous. The writing is top-notch, the art is amazing, and it actually has a pretty good message to it, but the way that it goes about getting there is needlessly creepy.

There's a girl named Lucy who lives in a house with her mother, father, and brother. Her father plays the tuba for a living. Her mother apparently also has a job (which you would probably need if one parent only plays the tuba). Lucy hears noises in the walls. She tells her mother, 'There's wolves in the walls. I can hear them.' Her mother says, 'No, that's probably mice,' adding, "If the wolves come out of the walls, then it's all over." Lucy says, "What's all over!?" Her mother says, "It. Everybody knows that." Over the next few days, Lucy hears the wolves at night when she's trying to sleep, and tells her father and brother, both of whom dismiss it and repeat the dire warning about 'it' being 'all over.' The noise increases each night, until one night, there are no noises, and then the wolves come out of the walls. The whole family runs, saying, 'It's all over!' and then they stop in the garden at the bottom of the hill by their house. The wolves stay in the house, eating their food and dancing and watching TV and stuff. Lucy has forgotten her toy pig puppet. The family discusses where they should go live (the Arctic Circle, Sahara Desert, outer space).

Lucy misses her pig puppet so much, she sneaks back into the house without telling anyone. To avoid the wolves, she goes into the walls herself (kind of phasing into it). She gets her puppet and returns to her family, and they sleep in the garden. The next day, "Lucy's mother went to work, and Lucy's brother went to school, and Lucy and her father sat down at the bottom of the garden. He practiced his tuba, and read travel brochures." Why doesn't she go to school? I'm really confused because the art makes it look like she's at least 15 years old. Maybe she's supposed to be a toddler? Maybe she's graduated high school already? Her mother comes back from work with food and they sit around a fire and talk more about where they could go live. Lucy says, "We could go back and live in our house again." Everybody says "What?" including "The Queen of Melanesia, who had dropped by to help with the gardening." Which is kind of a weird little side joke because she's actually in one or two other images, but never acknowledged elsewhere. Lucy points out that they could live in the walls, since the wolves aren't in the walls anymore, just the house. Since they're having trouble sleeping, they take her suggestion and move to the walls of their house.

But in the middle of the night, the wolves are having a party and keeping the family awake. "One of the wolves was playing her brother's video game, and was beating all the high scores." They're in her mother's jam. They're playing with her father's second-best tuba. The family gets angry, and then Lucy says, "Right. I've had enough." The only other thing that was in the walls with them is an old, broken chair, so she picks up a chair leg, and then all the rest of her family says, "You know, I've had just about as much as I can take of those wolves too." So they all pick up chair legs and jump out. And the wolves are all afraid and say,"Arrgh! The people have come out of the walls! And when the people come out of the walls... it's all over!" One of the wolves says, "Whose idea was this anyway?" The wolves run away to somewhere where there won't be any people in the walls, and they've never been seen again. The family cleans up the house. although Lucy's father has to sell his second-best tuba because it "had sustained severe jam damage." One night, Lucy hears elephants in the walls. She asks her pig puppet if she should tell everyone else, and the puppet responds, "I'm sure they'll find out soon enough." Lucy is not disturbed in the slightest that her pig puppet is talking (for the first time in the story). Is she pretending? Hallucinating? Is this all supposed to be a metaphor for something?

It's a funny book. I like the repetition of "When the wolves come out of the walls, it's all over" and that "everybody knows that", but it not making any sense to Lucy so she questions it. She challenges the norm and fixes the problem. But the wolves are artistically represented in a terrifying way, and there's a lot of darkness and creepiness in the art. I think if this was illustrated by somebody else in a different style (and I'm sure Neil Gaiman would have none of that), it could be illustrated in such a way as to not scare the pants off of small children. The art just feels like it's creepy for creepyness's sake, and not because the story really warrants that. The synopsis above makes it seem like a very funny, lighthearted book, with a good message about not blindly following tradition. But it's illustrated as if it were an episode of the Twilight Zone or something, in a way that reminds me of Ralph Steadman, where the wolves are inky, squiggly lines, and the people are abstractly realistic, where they're kind of blocky and their eyes are just black dots. It's a really fascinating art style. Like I said, I really loved the fact that Lucy is not only the one who figures out what is happening before anybody else does, but challenges everybody else on why they are actually afraid of this. But it's never outright pointed out that there's no reason to be afraid of it, and even at the end when the wolves are shown running away from the house, the family brandishing their chair legs, it's still done in a creepy style, the wolves and people as silhouettes, with weird smoke in the sky and a dark house. The idea is great, the execution is great, it's just not for the fainthearted child.

Just because something is traditional, that doesn't mean it's right. And don't be afraid of wolves in the walls.

I was 21 when I first saw caroline and even I had nightmares about it....gonna skip out on this book too.

Soooo kids don't believe them they are trying to trick you

I just said it wasn't for younger kids. Like 5-year-olds.