Good morning, how are you? I'm Dr. Worm. I'm interested in things. 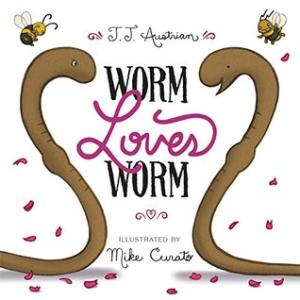 It obviously has a very LGBT-friendly message to it, but the bigger message can be generalized to a lot of things.

There are two worms, apparently earthworms. It doesn't even mention that scientifically earthworms are hermaphroditic, it's clear that they don't have a set gender, as opposed to the cricket and the beetle who are male, and the bees that are presumably female (although it doesn't say). The worms are both named "Worm" so that's why the book title is Worm Loves Worm. The cricket is named "Cricket," the beetle is named "Beetle" and the bees are just named "The Bees."

The first sentences are: "Worm loves Worm. 'Let's be married,' says Worm. 'Yes!' Answers Worm. 'Let's be married.'" So they start to get married, but then Cricket says, "First you need somebody to marry you. I'll do that." And Beetle says, "You've gotta have a best beetle, that's me." And The Bees say, "We'll be the bride's bees." And someone says they have to wear rings, but the worms argue that they don't have any fingers. Eventually everyone assumes there's gonna be a cake, and different people are demanding, you have to have this, or you have to have that.

The Bees say, "Well, which one of you is the bride?" Because they're the bride's bees, so they need to know who the bride is, and the next page is: "'I can be the bride,' says Worm. 'I can, too,' says Worm. So they're both the bride, and they're both the groom, and one ends up wearing a tuxedo with a veil, and the other has a wedding dress with a top hat. And the spider says, "Amazing." And then Cricket says, "Wait! That isn't how it's always been done!" And the worms say, "Well, we'll just change it, then." And the last page says, "So they were married... because Worm loves Worm." And everybody's happy.

Like I said, it's not simply an LGBT positive message. It is also showing that just because things are traditional doesn't mean that they're right. And you can keep some aspects of tradition while changing the ones that you don't like. Like they still have the wedding dress and tuxedo, they just mix them around so they're both wearing parts of each. And they still had the bride's bees and the cake, etc. but they put their own spin on it. Because the important thing (in this particular case) is that Worm loves Worm. They love each other, therefore they're going to get married. All the details don't matter. Just like people who get married in the courthouse; there's nothing wrong with that. You don't have to have a big to-do. The important thing is that you love each other. That's the point of getting married in our society, that you love each other.

Love transcends boundaries. Or, tradition can be fun, but don't let it stifle you.