You Don’t Want a Unicorn! 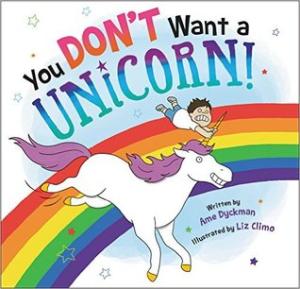 It's cute. There's a little boy who loves unicorns, so he makes a wish in a fountain and he gets a unicorn. It's awesome at first. The narrator is consistently warning the young boy that he shouldn't wish for a unicorn because they're just too much of a pain. Unicorns make a mess and scratch things with their horns. And since they live in groups, when they get lonely they call other unicorns, and then you get a whole bunch of unicorns having a unicorn party, which just wrecks your whole house. Then you have to wish them all away again. At the end, the sad little boy who has wished away all the unicorns decides to wish for a dragon. It implies the dragon is going to be quite a lot of trouble as well, especially seeing as how they breathe fire.

This is a really good example of a book with the moral of, "Be careful what you wish for," because the unicorn is what causes the boy trouble, just by being itself. In contrast, you have so many books where the wish gets twisted by a genie or something, or books like "The Little Rabbit Who Wanted Red Wings" where the wings themselves are not the source of the problem-- it's the reaction of everybody else in this book. And in this book, the narrator is constantly warning the boy from the beginning, and the boy doesn't listen and the narrator is clearly more knowledgeable about unicorns than the boy. So it's literally a wish, and he gets exactly what he asked for. It just turns out to be different from what he expected.

The story also has some of the aspects of how difficult pet care is, along with some aspects of "wild animals shouldn't be kept as pets," but this is one of the best examples I've seen of "Be careful what you wish for" done well.

Be careful what you wish for.