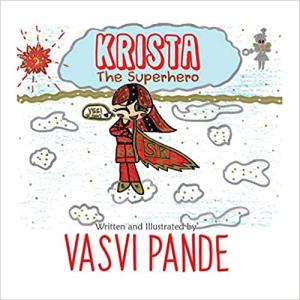 This is another book that was given to me to review. As usual with these, I try to be more constructive in my criticism and less mean.

This was written by an eight-year-old. It's obvious that it was written by an eight-year-old. I believe that the writing is fairly typical for eight-year-olds, though my kids aren't that old yet so I don't have a lot to compare it to. It's definitely clear that it's written by a kid, and she doesn't have a very good concept of story structure yet. It starts off saying, "A girl named Krista have [sic] always wished to become a superhero. Could I become a superhero? She thought." The next page is, "She lived with her dog named Vella, her elder brother Ram, her dad, and her mom." And then the author proceeds to give us the ages of the children and the dog. That's a very childlike thing to do: concentrating on facts that aren't relevant to the story. Her father, dog, and brother never appear again in the text, other than generic "family".

Krista, aged five, starts kindergarten. It seems that she's a new kid in class, though it's not explained if her family moved or anything. Her classmates are friendly. At recess, a boy is running, and about to trip and fall, and she runs up and catches him before he falls, and everyone calls her a superhero. The end.

I suppose it's nice that this will be preserved for the future, but I'm not really sure why Pande's parents (presumably) used a publishing service like BookVenture, or why BookVenture decided to reach out to me and ask for a review, other than it being free publicity. I'm not going to give something like this a five-star review. It kind of makes me think of the story behind "Friday" and Rebecca Black, where the main reason everybody ended up hating it was because of the publicist. Some things usually only come with experience, and the more experience you have reading books and seeing what others have done and how others have solved problems or gone wrong, the better your own work is. One of the most common pieces of advice to people on becoming better writers is to read. And eight-year-olds, bless their hearts, haven't been alive and reading long enough to get as much experience as they need to become amazing writers, unless they're child prodigies. Pande strikes me as average (for an eight-year-old). And her crayon illustrations are again, average. If these were made by an adult, even a self-published one, I would rate this book much worse. I can tell what the drawings are supposed to be, which is a step up from my six-year-old, but not much.

Basically, I think it's a good showing, but I'm not surprised by it. I'm sure if she continues writing and drawing, she'll get better. But you don't usually see the work done by famous authors and illustrators at age eight, unless it's in some kind of retrospective. Who knows, maybe Pande will become a famous author/illustrator. And then this book will be worth a lot. But given how much competition is in the marketplace, it's not statistically likely.

She's got a long way to go. But that's good, because she's eight. She's not supposed to be a famous children's book author yet. She's supposed to be an eight-year-old. And she seems to be doing a good job at that. I think her intended message is something along the lines of "Helping others, even in small ways is like being a superhero."

It's important to preserve the art of an eight-year-old.

This book being published

This book being published reminds me of an article in Mother Jones magazine back in the early 2000's exhorting the new digital move tech now quite commonplace; it posited the idea that everybody and anybody should be able to have their home movies be shown at the local movie theater because of this new tech (specifically that of a little girl's like this one.) Aside from kids at school getting an assignment to shoot a video and then having it shown to the class at their school with a video projector that the school would/might have, there is no way that a multiplex owned by a movie chain would do this, or do this for anything else amateurly made by somebody (maybe an independent theater would.) That's what this self-published book reminds me of, and what you said reinforces that.

As an interesting side note, the parents of the author of the book contacted me after my review, and their comments suggested that they weren't happy with what the publicist had done, including sending me a proof copy that hadn't been properly edited. They appreciated the review but seemed to agree that it was odd that the publicist had sent it to me.