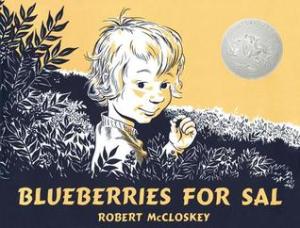 McCloskey sure likes writing animal books, doesn't he? There's a little girl named Sal (she never says anything, so she's probably pre-verbal, so I'm going to guess she's maybe one and a half or two years old? at most, she's four). Her mother takes her to Blueberry Hill so they can pick blueberries to can for the winter. Sal, for the most part, eats the blueberries. She starts eating a couple out of her mother's bucket, so her mother tells her to go off and pick her own blueberries. On the other side of the hill, there's a mother bear and a baby bear. Sal gets separated from her mother (who basically wanders off, picking berries, without so much as a backwards glance to be sure her young daughter is following her). The little bear gets separated from his mother. Both children, bear and human, look for their mothers, and they each find the wrong mother and follow them without hesitation. Sal drops a blueberry in her bucket, which the oblivious mother bear finally recognizes as an unusual noise, and says, "Garumpf!" realizes it's not her child, and backs away because she's afraid of people. Little Bear starts eating berries out of Sal's mother's bucket, so the mother says, "Sal, stop that," but of course it's not Sal. The bear doesn't listen, at which point Sal's mother finally turns around, then backs away because she's afraid of bears. She then looks for Sal and finds her. The mother bear finds her son. The bears go home, "eating blueberries all the way, and full of food stored up for next winter. And Little Sal and her mother went down the other side of Blueberry Hill, picking berries all the way, and drove home with food to can for next winter--a whole pail of blueberries and three more besides." (Three more pails or three more blueberries?) And that's the end. That's it. The last page shows the humans in the kitchen cooking things and putting blueberries in jars from a pot. Presumably that's how you can blueberries. I've never done it before.

For a story involving not just bears, but a mother bear and her cub, it's surprisingly boring. It kind of smacks of negligence on the part of Sal's mother. Seriously, leaving her very young, small, daughter to fend for herself in an area that is clearly populated by bears? It's boring and pastoral. The art is decent, especially for the time period, but it has that old-time children's book wordiness and glorification of nature. In reality, bears are dangerous. We avoid them for a reason. They're wild animals. Also, Sal's mother is not nearly as upset as you would expect when she finds a bear in place of her daughter. Isn't she worried that her daughter has encountered a bear, and is possibly mauled? Nope. She just complacently looks for her.

Bear cubs and human children are similar. They both wander off and like to eat blueberries.

Then it wasn't very effective.

I found it incredibly boring, so it's not very good at entertaining.

I believe you've missed the entire point of the story- as well as the endearing artwork done by the writer. The characters are modelled after his wife and one of his daughters-Sally. The story is a 'picture' book- hence the lack of words. Its loosely relating the ways people and bears prepare for winter, how all children, bear and human wander, a happy ending.
Yes, this the end somewhat reflects how one cans blueberries. The critic obviously has grown up in a world where stranger danger and harnesses/leashes are standard in raising children. This was written in 1948- it reflects the world as it was when most people born between 1948 & 1978 ish ~ I remember this world- parents did allow young kids to wander, bc its not dangerous in reality-the only reason its dangerous today is due to crazy people and perverts I loved Me. McCloskeys stories as a child, read them to ky own children. This critic would complain about Robert Munsch's Murmel Murmel Murmel because babies don't get pulled from holes in the ground by children. Lighten up- a story needn't be sensible to be good!.

It's no more dangerous today

Troll
Thanks for the Support

You are a moron but you made me laugh. "...wordiness and glorification of nature" What a bummer lol. Loved this book.