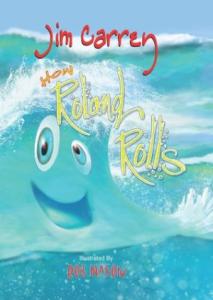 What on earth? What made Jim Carrey think he could write? He can't. I'll tell you that. His poetry is very cliche, and very forced sounding. The whole thing is in poetry. Also, although the artist has good technical ability, everything in this book is very trippy-looking. It looks like Wyland dropped some acid, painted these, and then put googly eyes all over everything.

The story just meanders. It doesn't go anywhere until the very end. There's a wave named Roland. Now, to begin with, personifying a wave is a really bold move. And it fails. He cannot handle having a wave as a main character, because there's just not enough understanding of what a wave is, and what they are physically capable of doing. Waves are difficult to understand to begin with, and this book is not helping. This wave is apparently intelligent and anthropomorphic and has friends that are other waves. A ship comes in between him and his friends, and he can't find his friends anymore and he's lonely. Then there's another wave that's like scary named Gnarly--it could possibly eat him somehow? It doesn't, though, it just wrecks somebody's boat (thankfully nobody dies). He meets a seagull, then he meets a girl wave (because waves also need genders, apparently) and of course her name is "Shimmer" and she's got earrings made of shells and eyelashes (that's how you can tell she's a girl: she has eyelashes and earrings). It's just ridiculous.

Roland and Shimmer learn that someday, they're going to crash into the coast... and die, I guess... "Then Roland was told that life ends in the sand/That the coast is a place that a wave can't go past,/Unless you're like Gnarly and even then you won't last!" Why even mention Gnarly there if he's not going to last either? I guess Gnarly is a tsunami or something. It shows him wrecking a house. So Roland and Shimmer crash on the beach, and then they get mixed together, and then they both realized that they're not really waves; they're the whole ocean. And every single bit piece of water is them. All of the pictures are trippy, but probably the trippiest picture is a girl (or woman, I don't know how old she is) crying, accompanied by the text, "And when you're sad, even your tears are Roland." Each of her tears has one of Roland's googly eyeballs in it.

This book is disturbing. Basically, there's a message tacked on to the end. It doesn't make any sense. It just says, "If you think you're just one little wave... you're just wrong/You're like Roland, and you'll always be rollin' along." What? What the- what? Is he trying to say that you can make a difference? Because Roland doesn't make a difference. I mean that's what that sounds like to me but maybe he's just saying that people never die? I don't even understand this. Is it some kind of like religious message? I'm just baffled. I really don't understand this. In the inner jacket, it says that it's important "that parents help their children feel worthwhile" and also "making them feel loved and worthy of our involvement." Nope, no context there.

So it ends up saying, you're not just a wave, you're the ocean. But you're not going to notice that until you die. I don't understand this book. I really don't. I've read a lot of books that are baffling just like this one; this is just a particularly egregious example of it, where the wording and the the vagueness of the wording make it obvious that the author is aiming for something deep and profound, but thinks that being vague and mysterious is good enough. It's not. If you're trying to get something deep and profound, you kind of have to talk about your message a little bit more explicitly than this.

He's just a bad writer. I mean, he may be a good actor, but he's not a good writer. Which really shows. And like I said, the artist made everything looks very shiny and computer-animated, except for the rare people, and there's just googly-looking eyeballs everywhere. This book is so bizarre.

This is such a badly-written book, it inspired me to create a new category. I can't call it "bad" because I've reserved that rating for terrible morals, so I've come up with the new rating "poor."

You're a part of everything, but you won't realize it until after you're dead.

It's a book that explains death to kids in a less messed up way than "you go to heaven if God let's you, or torment in a fiery hell"

The wave is representative of a persons ephemeral life, and the ocean of the greater universe. Roland's interactions were fleeting like life.

Maybe the reviewer should drop some acid. Sounds like they need a heavy dose.

Jim Carrey's book is based on a metaphysical view. If someone does not understand metaphysics (the nature of reality).....they shouldn't even read the book -nor let their children read it.

Not sure who would read it, then

I am of the belief that nobody actually understands the nature of reality. We're working on it with science, but we haven't gotten there yet. My main problem the book is not its subject matter but that it fails to communicate anything clearly. If it's a children's book, one would think it would try to explain its view in a way that even a child could understand it, and it's beyond my grasp.

If your the child reading this then your opinion is valid but since your NOT the child then your opinion is invalid. it's not nice of me to say but look at it this way ~ Kids have an extraordinary imagination and their heads are full of illusions that the parents tell them of. maybe I can relate because I'm from a younger generation but life doesn't make sense. not even as you grow old and frail. in fact, life only becomes even MORE complicated!!! And honestly, have you tried acid? How would you know for sure what it feels and looks like to trip on acid because I have never nor will I ever? Because I know I'm not the only one thinking this. You probably think your high and mighty because you use ' sophisticated ' words. haha okay, I'm done before someone gets heated! XDXD

Your opinion is invalid too.

I'm guessing you're not a child, so your opinion about my opinion being invalid is also invalid.

I'm actually still a child. pssft haha you might be getting too big for your britches. XDXD