Possibly useful to get parents to open up. 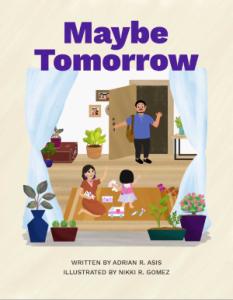 Disclaimer: this book was given to me by the author to review, so I’m probably being a little more lenient on it than I would a book from a large publishing house.

I'd put this kind of on the border between "meh" and "good." The illustrations and writing are pretty good. The story is, there's a young girl named Grace who lives in an apartment with her mom and her dad. Her dad's a doctor. Her mom is a stay-at-home mom. They like to have fun together. But one day her dad comes home from the hospital, and her mom says, 'You can't give him a hug. You can't go near him for a while.' And doesn't explain why, despite the fact that the main character is six and could probably have some kind of understanding of why her dad's wearing a mask. This book is about Covid-19 without saying it's about Covid-19, to make it more applicable to other similar situations, although I really hope we don't have more situations anytime soon where we have to wear masks and socially distance. The mother starts sleeping in Grace's bed and the father sleeps alone, and they FaceTime at night. In the next month, her mom is on the phone and crying and Grace doesn't know why, and decides not to ask. It's a repeated motif in the book: Grace thinks, "I wanted to ask why but decided not to." It never says why she decided not to. Is she afraid? Does she not think she'll like the answer, or understand it? From that point on, her father stays the night in a place near the hospital and doesn't come home for a while, and they still FaceTime at night and the mother still sleeps in the same bed as Grace. The daughter hears her mother crying at night sometimes and doesn't ask why. The next month, the mom says that the dad is coming back home but they still can't hug him. Grace says her birthday is in less than two months, and says "I told Dad on FaceTime that I hoped things with our family would be back to normal by then. But Dad said he didn't know if that would happen." The next, and final page, which is just white text on a black background, reads, "Maybe tomorrow, I'll be brave enough to ask why."

I find some things about this book kind of frustrating because I have two kids, ages six and four, and they both know about Covid. Maybe they don't understand it 100%, and thankfully our immediate family isn't split apart like this, but they know they can't see their local grandparents because of the virus. My in-laws visited after Christmas, and we sat in the backyard, all wearing masks, including the kids. They can't spend the night at their grandparents' house anymore because of Covid. They can't run up to strangers anymore, and have to resort to shouting their personal details at passerby from a distance. ("I'm four! My brother is six! What's your house number?") There are a lot of things we can't do because of Covid, like eating dinner at a restaurant, or scheduling play dates, or going somewhere special for birthdays. We're very open and honest with our kids about this. I suppose that some parents might have difficulty talking about this kind of thing to their kids, and maybe this book would allow them to open up a little bit about it? Is it a cautionary tale for parents, like, 'Your kids aren't going to ask you what's wrong, but just worry themselves sick unless you take the initiative and explain what's going on?' It seems unusual for a child that age to not be asking 'Why' every five minutes, but maybe some kids are like that. I guess parents could read this to their kids and ask the kids things like, 'Do you know why this is happening to this girl? What would you do if you were in this position? Is there anything you want to ask us about?' Or maybe it's supposed to be implied that the mother is actually explaining and the kid isn't listening, or not understanding the words? If so, I'm not getting that.

I guess a lot of parents are more reluctant to talk to their kids about heavy topics like this. Some people say that my kids shouldn't know about where babies come from at this age, but I don't understand why not. I just tell them that their bodies are too young to make babies right now, and that they won't even feel like doing that sort of thing until they're older. I don't want to leave it to chance, or have them get misinformation, or worse yet, end up too anxious to ask me about it. It just seems so weird that you wouldn't tell your kid about Covid. Is the culture that different in the Phillipines, where the book was published? It's written to be applicable to anywhere you have apartments and doctors. Do they not have Kindergarten? Because that's one major reason my six-year-old knows about Covid: he had to stop going to school in person, and start doing Zoom calls. (My four-year-old was also going to preschool, but that's not a given in the US.) The book takes place over a March-to-May timeline, so if Grace goes to school on the same schedule as most kids in the US, it's the end of the school year for her, but doesn't have to deal with the beginning of the next one in late summer. It just seems like there'd be more changes in Grace's life besides her father's situation. If she had friends or neighbors, or local family, she wouldn't be seeing them, either.

Tell your children about things because sometimes they're too scared to ask themselves. Or: Covid-19 sucks.