Snow White and the Seven Dwarfs

You’d think the queen would get a new mirror eventually. 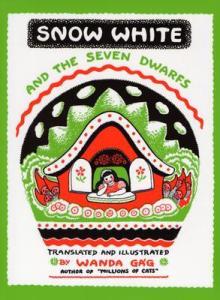 This is a very strange version of the Snow White story. It's mostly pretty standard stuff. It is somewhat unclear how old Snow White is when she meets the dwarves and how long she stays there, though it explicitly says that she's seven years old when she becomes more fair than the queen. (And the illustrations don't show her aging at that point, so maybe she's still seven when she eats the apple and the prince is a pedophile.)

She's so beautiful that everybody helps her. Wild animals don't even touch her, because... well, it doesn't really say. I assume because she's innocent and pure, or something.

When she finds the dwarves' house, the story becomes bizarrely similar to Goldilocks and the Three Bears, turned up to Seven: she finds a bunch of beds and she's really tired, so she lays in the first one. But it's too hard. The second is too soft. The third is too short. The fourth is too narrow. The fifth, too flat. The sixth, too fluffy. And the seventh is just right. And the dwarves come home and say, 'Who's been messing up our house? Someone's been sleeping in my bed' and the last dwarf says, 'Someone's been sleeping in my bed and here she is' and they see her and go, 'Oh, wow, she's so beautiful. Let's not wake her.' And when she wakes up, they say, 'Do you want to be our housekeeper and clean for us? We'll take care of you! You're so pretty!'

The queen, of course, finds out about her new address, and dresses up like a peddler and brings some laces and laces up Snow White's bodice too tight, and Snow White passes out. The dwarves come and cut it off of her and revive her. The queen comes again, with a poisonous comb, and Snow White is super naive. 'Oh, I'm not supposed to let you in!' 'What about if I just give you the comb through the window and then you put it in your hair?' And of course she does, and passes out because it's poisonous. The dwarves take it out and she comes back to life. Then the queen comes with the apple-- half poisoned and half not poisoned, so the queen/old woman is able to cut it in half and say, 'Hey, look, I ate this half, it's totally fine! Try your half!' And then Snow White passes out again, like some kind of Pokemon in a gullibility contest. She is still "so fresh and rosy that she seems to be blooming with health" and the dwarves make a crystal casket and put it out on a hilltop to basically worship her corpse, and a random prince comes by and says, 'Holy crap, I need this dead woman in my house!' and they're like, 'No,' and then he's like, 'I'll protect it,' and they're like 'Oh, okay.' His servants carry the casket, and one trips, at which point she gags up the poisoned apple and comes back to life. And then "He told her all that had happened and begged her to bring his bride", and they prepare for a "gay and gala wedding". The queen, who had been happy when Snow White was comatose because her mirror was telling her she was the fairest, is invited to the wedding for some unfathomable reason, checks her mirror before she goes, and it tells her that she's going to Snow White's wedding, and she's angry so she goes anyway, and they make her wear a pair of red-hot shoes and she dances herself to death. No Disney deaths here.

The illustrations are kind of cutesy, in a pen-and-ink style, and very similar to other illustrations in that time period. The dwarves are actually all represented by symbols: a crescent moon, a tree, a diamond, a clover, a tulip, a star, and a heart. The pictures aren't really in spreads the way that became standard in later picture books, but sometimes small illustrations are sandwiched between big chunks of text.

It's pretty faithful to the standard Grimm story, as far as I remember. Not a great story, but not really the opposite of something children should be taught. The pedophile/necrophile prince throws up some red flags, and murder via boogie isn't a common thing lately, but I'm pretty sure nobody is advocating to their children that they "be more like Snow White" so it's more about how the story is viewed today in context.

Be really pretty, and everybody will take care of you even if you're an idiot.