Papa Bear fails at being a detective. 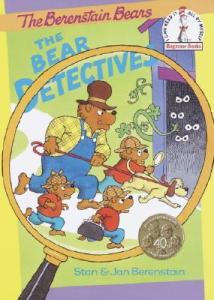 It's another one of these old-style Berenstain Bear books where Papa Bear is trying to show people how to do something and failing at it. Just like the Bear Scouts book, Small Bear and his friends, who in this case are detectives, have a manual that they are following. Two of his friends are clearly girls, this time, as they are depicted wearing deerstalker caps with bows on them. Farmer Ben won a prize for a pumpkin, and he can't find it, so they're trying to find the thief who stole it. Papa Bear keeps finding random animals, and it turns out that the farmer's wife made it into a pie, and then they eat the pie, and everybody's happy.

This is better than some of the other books in that Papa Bear isn't getting mangled, and he's doing reasonable things. They just don't seem to actually lead to the answers. I'm not sure where the detectives got their book from. The book says, in its entirety: "First look around/for any TRACKS/that are on the ground", "Look all around/for another clue", "Before you leap,/be sure to look", and, "A good detective/will USE HIS NOSE!" Wow, that's a terribly useful book. Papa Bear has a dog, for crying out loud, that he seems to be trying to get to sniff the trail. So they are literally following their noses at the beginning and that doesn't lead to the answer. "A good detective/writes things down," says Papa Bear, and he writes down everywhere they fail to find anything. This leads to some repetition, which is not too annoying, but it is a good idea to write things down. He's not doing stupid things. He's doing the right kind of thing, just perhaps being a little overenthusiastic. At least he's supervising these small children who are pretending to be detectives, because they're probably too young to go wandering around by themselves (although if it takes place in the 70s, kids apparently used to do that kind of thing all the time). It's odd. It's just weird more than anything else. It's less irritating than most of the other Papa-Bear-is-an-idiot books. It's not really trying to say anything; it's just trying to be funny, and it's not doing a very good job.