Boring book literally about bears being on wheels. 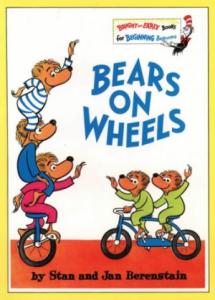 Wow, this is a super boring book. 1969--it's not even that old. It is literally bears on wheels. That's it. A bear on a unicycle, somebody jumps on his shoulders, then other bears jump on top of him. Somebody has a bicycle, there's some guy with a five-wheel bicycle, and different numbers of bears piled on top of different numbers of wheels. They get in crashes, and bears go flying through the air, and that's it. A lot less interesting than it sounds. Very simple. Nothing happens. There's no story. Not interesting enough for me to read to a child.

The best part (the only interesting part): The massive collision at the end, with everybody flying through the air, including the bicycles, with the matter-of-fact words underneath, "Twenty-one on none."