The Berenstain Bears and the Big Red Kite 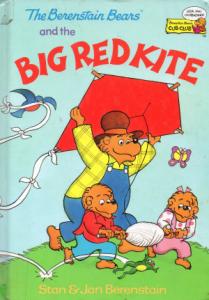 Boring. Rhymes are reminiscent of “The Cat in the Hat”, and it feels weird and forced compared to the other Berenstain Bears books which don't always rhyme. Nobody talks like that. When you put it into rhyme like that, it doesn't sound natural. The reason "The Cat in the Hat" sounds like it does is because Dr. Seuss was deliberately trying to use a limited vocabulary.

So there's a kite contest. It doesn't say what the contest is about, and doesn't say what they're being judged on. They make a kite out of paper and an old bed sheet for a tail. They go to the contest and look at all the other kites. The judge and the other contestants go, “Nyah, your kite isn't fancy like everybody else's kite!” and they say, “Yeah? Well, let's fly!” They keep trying, and they get the kite up in the air, and the wind gets really strong. All the fancy kites break because the wind is too strong, but their homemade kite doesn't break for no apparent reason, just because it's not “fancy”. Since all the other kites broke, they win more or less by default. It says “they win fair and square.” In fact, it says it twice, both times rhyming it with “Bear.”

The last page says that the most important thing is that they didn't quit and that they did their best. Oddly, they weren't really thinking of quitting, even when people were making fun of their kite.

Don't give up. Do your best.