The Berenstain Bears and Mama For Mayor

Basically half a book about political responsibility. 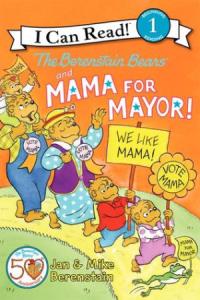 What the heck? This is a pretty inane book. I don't think it's a bad message, just stupid.

Mama is upset that there are potholes in the road, so she decides to run for mayor and everybody helps her. Apparently (according to the campaign posters), her name is actually "Mama." All the bears running for mayor gives speeches, and so Mama gives hers and says she'll fix the roads, and put up new streetlights and starts going overboard in her speech, including promising honey in every pot (a nice timely reference to Herbert Hoover), and actually succeeds in becoming mayor. At that point, everybody asks her to do what she said she was going to do. And the last page says, "'There is just one thing wrong with running for mayor,' said Brother. 'You just might win!'" And then it ends.

So it's left unexplored what the consequences are of what she just did. Does she get impeached? What happens? Does she succeed in making the improvements that she wanted to? It's like the beginning of a story, and then it just ends. It feels like it's going to go somewhere, and then it doesn't. This is just sloppy. I guess the message is, "Don't run for mayor." I'm not sure why, though. She doesn't dislike the fact that she's mayor, just that people actually expect her to do things. Well, of course they do. She said she would. So... what? Huh? I'm so confused. It's like they didn't even care enough to finish the book.

The best part: where the bear children are playing "Bearopoly", which is a board game that involves tree tokens instead of houses and hotels, apparently.