The Berenstain Bears and the Messy Room 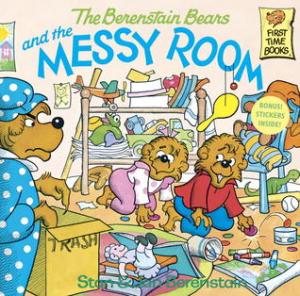 Sigh. It's kind of dumb because it implies that the reason people's rooms are a mess is because they don't have any containers to put things away in, which is not true in most circumstances.

Brother and Sister share a room in the tree house. It's messy. Whenever Mama tells them to clean it up, they sit there and argue instead of cleaning up. So Mama just gets fed up and puts things away herself, and eventually gets so angry that she brings a big box in and threatens to throw everything away. The kids start crying, then Papa comes up, screams at people, and holds a family meeting right then and there. They decide that maybe they need some toy boxes and organizational tools, and then everybody organizes everything, and then it looks perfect. And it's "a neat, clean, well-organized room-- and so much more relaxing!" "[A]nd a lot more fun!"

And of course you know that Mama's still going to end up putting stuff away, because just having rules about not arguing doesn't mean the kids aren't going to argue. Seriously. It doesn't even detail what those rules could be. It also says, "It wasn't that Brother and Sister were naturally messy. They tried to keep their room straight." Just because somebody has a mess doesn't imply that they are messy, but there's nothing wrong with being messy. Cleaning is important, and maybe the kids need to understand the importance of cleaning in some way other than their mother flipping out and threatening to throw everything away. It's kind of like the neatness of the room is an afterthought. But it's not fair to their mother. And they need to understand that, and maybe they could have a more natural consequence, like not being able to find what they're looking for, or falling over things that have been left in the middle of the floor. That happens too, and that could be a realistic consequence instead of Mama making threats because she's being taking advantage of as a parent. You need to teach your kids how to clean up. There are right ways and wrong ways to clean up. Obviously, arguing is not cleaning up, but sharing the job and working as a team may be difficult, so maybe they could each clean up their own side of the room. Maybe they need to draw a line down the middle. Maybe they each need their own room. But this doesn't seem like it's going to solve the problem in a long term way.